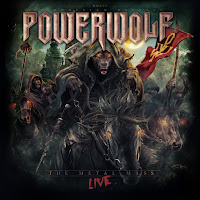 Powerwolf has so many deluxe double disc releases of their albums that this probably wasn't their first rodeo with a proper 'live' effort; I know they had one that came with a Metal Hammer magazine, but at least for me, this was my first experience hearing these loveable Saarland spook-metallers on a full live recording, and I expected they'd give it as much effort as they seem to do anything else. This was right around the time I had started to lose a little interest in their studio material, not because I thought any of it was bad, just that I thought they were feeling a little redundant with both the writing, the cover art choices, etc. That ghost ship would eventually right itself, as I've enjoyed The Sacrament of Sin more than Blessed & Possessed, but at least hearing it live would possess some novelty.

Spoiler: it does, but at the same time, the band has an insanely professional sound here which is not a far cry from how they sound in the studio. Attila's voice soars here with all its Romanian bombast, the guy is no joke...he's not the highest pitched or most versatile, but he's got a burly tone that just takes command of the audience and he doesn't really fuck up, hardly, at all. Some might consider that a bit of a weakness, since they want to hear the more 'real' attack on stage, but in a European scene whose power and Gothic metal bands are so honed in on polish and presentation, what I'm hearing from these Germans has to place them right at the top of the pile. The guitars and organs sound awesome, the drums have a nice slap to them which sounds especially good when they're doing the marching beats alongside the operatic arrangements, and I've rarely heard such a smooth mix of the audience cheering...it almost sounds too good to be true. Doesn't hurt that it's also being recorded on their home turf, so you can hear Dorn speaking to them in German between tunes and even that sounds just about perfect!

The set list is definitely where it misses out a little, almost entirely ignoring my favorite album Lupus Dei other than the title track...but no "In Blood We Trust", "When the Moon Shines Red", "Mother Mary is a Bird of Prey" or "We Take it from the Living", tunes I'd figure would be staples. I don't think the debut makes it on here at all, but Bible of the Beast through Blessed & Possessed are all covered well enough if you dig those, and they do such a flawless job representing that stuff that it's hard to hold a grudge...they were probably just tired of the earlier material, and much of the band's popularity picked up in the 2010s as they had built a solid live presence for tours and festivals. This is quite a good live effort, and Powerwolf has proven that they do not screw around, whether it be their studio output, cover songs album, live performances, or even the more recent symphonic version of The Sacrament of Sin. They believe in themselves, and spare no expense or effort to succeed, and as silly as they can seem with their ghoulish stage makeup, they demand respect and they've got mine. I still haven't tried out their board game though, Armata Strigoi...that will be the ultimate test...

Posted by autothrall at 4:03 PM