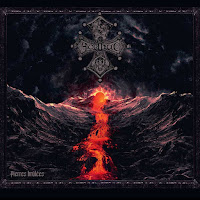 One of the most textured and engaging acts of the Medieval black metal scene coming largely from France, Aorlhac hit a new summit with their 2018 album L'esprit des vents, which I admit to listening the fuck out of in the ensuing years. There was a natural electricity to experience what they might put out next, and having spun Pierres brûlées for about a month now, I'm happy to say it's a worthwhile successor, even if it does not quite blow me away or evolve their sound nearly as much as they'd obviously done in the midst of that 2010-2018 period. It might not seek such soaring heights, but it's a damned dense, reliable effort which can once again transport the listener through its interpretation of traditional black metal techniques centuries in to the past and make the themes and style fit together seamlessly.

The style is heavily characterized by steadily blasting tracks with highly melodic arrangements of rhythm guitar, which are frankly a better fit for the lyrical themes and exploration of history than the more evil and diabolic passages we tend to equate with the genre; and this is an exception I tend to take when a band can create such a formidable gestalt of concept and style. There's a a never-ending cycle of desperation created through the riffing, and while a lot of the note progressions are splayed out in patterns that can be somewhat predictable within the niche, they just work so wonderfully alongside the blend of howled clean vocals and dirtier rasps. This record is like a flood of emotions from someone dying of a sword wound, a windy ascension of pain and majesty which goes so fast that it takes flight. That's not to say that the band doesn't have its moments where they break down into a more moderate pace with lots of kick drums and darker, harsher vocals, but it's this high temp that they will generally be associated with. I do really appreciate when they try more rhythmic variation, like the eerie intro to "Nos hameaux désespérés", and I feel the acoustic material like the "Averses sur Peyre-Arse" interlude is damn near mandatory to help break up the faster flow from any monotony.

Aorhlac might still not reach the top tier of distinct, musically adventurous French black metal acts like Deathspell Omega, Blut Aus Nord or the ever controversial Peste Noire, but there's certainly an identity and fluidity of musical expression here which solidifies them as one of the contenders in that scene, and of all the strains of metal music I feel like this is just the best married to the idea of exploring the past. I'll not lie and say that this trio couldn't use a little more variation, perhaps even more acoustics or folksy passages to help flesh out the authenticity of their themes, but they are nonetheless a fantastic band and this one sits just below L'esprit des vents in overall strength.