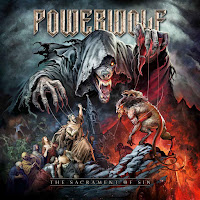 There was nothing inherently 'wrong' with Blessed & Possessed, the band's previous album, but it felt like a clear case of diminishing returns, Powerwolf writing more or less the same types of songs with only an arbitrary amount of variation. Plenty of fodder for the live sets, where most of these fist pumping horror-tinged power metal anthems can tend to run into one another, but just not a lot that was standing out in my mind even a half hours listening to it. Its follow-up, The Sacrament of Sin, doesn't exactly thrust the band back into the thundering graces of their first three albums, which for me remain the pinnacle in terms of songwriting ideas and truly catchy hooks and choruses, but there is something slightly more subdued and mature about this one that just ever slow slightly gets the Transylvanian express back on the tracks.

If you still want your mug-swinging, organ hymnal critiques of the Church of the past, you know the naughty Christians that hunt all those benevolent critters like vampires, werewolves and witches, and catching a lot of innocents in the crossfire, then you've got a tune like "Killers with the Cross" which is basically like Sabaton, the Haunted House edition, and it's not the only case here. "Demons Are a Girl's Best Friend" is probably one of the breakout singles here, a little naughty but busting out a nice chorus flow that surely gets a lot of folks singing along at the shows. There's also the big, sweeping "Where the Wild Wolves Have Gone", which is more of a lighter flicker, operatic escalation wrapped in power ballad aesthetics; it just comes across as the band spreading its (gargoyle) wings to try something marginally different, and that one also hits a satisfying chorus. The title track, "Fist by Fist (Sacralize or Strike)" and "Nightside of Siberia" are also a couple of favorites here which give a steady ass kicking even if they're not quite so memorable as some of the amazing things they've written in the past. The latter has a little melodic chugging pattern similar to Amon Amarth's stuff, ironic since Powerwolf covers one of their tracks on Metallum Nostrum. It works.

Production and performance are at the same high standard the band always sets for itself...even though this is not the 'classical' version of this album, it still gives that impression with a lot of the bombast created through the backing vocals, organs and synthesizers, all accompanied by simpler, driving guitars that make the band sound like its constantly on the march. Attila stretches himself pretty far with a couple of the howls here, and he's not doing anything too unique in terms of advancing or innovating his style, but the guy just sounds good whether the band is hammering away behind him or he's belting out some pompous lines to the accompaniment of only the organs or choir. In the end we're talking about an album which doesn't stand out too far above the rest, but matches up with Preachers of the Night or Blood of the Saints, dependable and slightly more inspired than Blessed & Possessed, but not much. And full disclosure: I actually think The Symphony of Sin is quite a lot better than this, you might be swapping out the metal, but those orchestrated versions are just more interesting, and alternatingly dark and glorious. Compared to that surprise, this sacrament feels a mite insipid.

Posted by autothrall at 3:57 PM