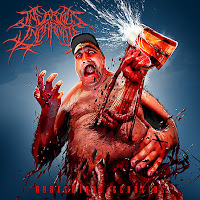 The prospect of a brutal death metal alternative to the Teutonic alcohol thrashers Tankard is a fun one, because the suds must flow across all genres of carnage, and it's one that knee-slappingly named Inebrious Incarnate seems to embrace, with what must be one of the most fun and outrageous album covers you've seen all year. Reading that some of these blokes were also members of Unfathomable Ruination kind of keyed me in the musical content was going to be no laughing matter, and it's not, but a tautly executed array of face-punching riffs that sit well within their parent style but also show no shyness towards including the occasionally more grinding edge, or maybe even a bit of aggressive, technical thrashing like on the opening title track.

The production is really bright and pugilistic, the rhythm guitars have all the chugging force you'd need to offset the squeals or spikes of technicality, but there's also a nice boxy tone to it which doesn't ever feel too terribly over-dubbed or polished like a lot of albums in this niche can feel. The major influences I can feel through this 37-minute drubbing are perhaps Suffocation, George Fisher-era Cannibal Corpse, and Cryptopsy, but sometimes they go for a total knuckle dragging slowdown mugging ala Devourment, or even some clinical death/thrash chops that are reminiscent of Dutch staples like Prostitute Disfigurement or Pestilence. The vocals are cast in a genre-typical guttural bark mixed with snarls circa Napalm Death, but it flexes really well with the rhythmic variation and he gets a nice sustain over some of the ends of his lines which hovers ominously over the much busier music flashing beneath. The drums are so frothy and fun that the kit sounds like its about to explode out of the recording like the beer glass through the entrail-spilling torso on the cover, but there's still a great level of control, lots of fills being thrown around there, grooves that stick.

In fact Inebrous Incarnate tries to pack in as much as they can into the space of these 3-minute-and-change tracks without ever going disgustingly showy or wanky. What thrilled me the most was how they manage to pack their chugs and breakdowns with a more roiling, busy structure before hitting all the pinches and squeals, it keeps the record rhythmically entertaining rather than something too dull that you've heard before. That's not to say they're strikingly original, and this does rely somewhat on the hilarious lyrical alcoholic novelty of tracks like "Hair of the Cerberus", "Double Liver Destroyer" and "Moonshine Supremacy" to stand apart, and the fact that this is way more in the 'fun lane' than just the usual gore-soaked paeans to serial killer streaks. A fun full-length debut with lots of 'fuck yes' moments in the churning, choppy rhythmic attack, well suited to tearing up your living room or rehearsal studio while on your latest bender. Team these guys up with Cannabis Corpse for a bill of punishing substance-abuse mosh excess.

Posted by autothrall at 6:30 AM