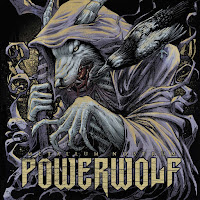 I touched a little on this material when I was reviewing the Powerwolf full-length Blessed & Possessed that it was originally attached to, a whole disc of covers that added most of the value if you were lucky enough to grab the deluxe version of that album, which I thought was otherwise one of their weaker studio efforts which was starting to just sound redundant to what they'd already released. But I wanted to come back around to Metallum Nostrum, especially as its got its own release that can be picked up by anyone who missed out the first time around, and because it's developed into one of my go-to cover albums by a power metal band, standing proudly aside Hammerfall's Masterpieces from 2008.

Powerwolf is a band I really enjoy for both the quality of much of their output, as well as the blend of Gothic horror and sacrilegious snark that stands out as so unique among the rest of the German heavy/power metal field. They're basically the Universal Monsters of the scene, and listening through Metallum Nostrum they pretty much lay bare the sorts of influences you would have expected them to cultivate into what they've become. I've come to believe that just about every choice here was well-considered and makes for something that can naturally help pad out their sets when in need of a cover that will fit snugly with their originals. From the power metal of their countrymen Running Wild's "Consquistadores" and double coverage of Judas Priest's Painkiller with "Night Crawler" and "Touch of Evil", you can tell where a lot of the propulsion of their style originated, and then from others like "The Evil That Men Do", Ozzy's "Shot in the Dark" or Sabbath's "Headless Cross", they're touching on a lot of the classics without just picking the most obvious hits, and its much appreciated.

Something like Amon Amarth is a little more far afield, and yet they once again took this one and turned it into Powerwolf proper with all the pomp and majesty you equate with their own material. Most of this stuff is just glittering with the moonlit pipe organ tones they use fluently, and Attila does a fantastic job at maintaining his own vocal identity rather than just clinging to all the other bands. "Edge of Thorns" is a sore spot for me since I'm just not a fan of those first few Zak-fronted Savatage discs, but I can totally understand how these guys would be a fan of that, and although it's the weakest tune for me, I think I like it with Attila singing a little more these days. The production is just all-out here, there might be some points where it's a little blander than on their own albums, but a lot more went into this than just taking the piss in their garage with some covers and its a fun collection that stacks up well with the rest of their catalog.

Posted by autothrall at 3:53 PM