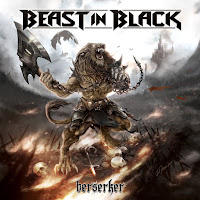 While his previous band Battle Beast continues to drift into an almost pure popular arena metal outlet, playing generic, unchallenging riffs with a few more intricate dressings, relying heavily on the charismatic vocalist's stage presence and delivery, it seemed like Anton Kabanen wanted to head back into more ambitious territory. No surprise then that Beast in Black comes out firing with a more decidedly heavier Euro power metal vibe that lines up a little more with where his alma mater was once headed. Don't get me wrong, this is still a band that plays it safe with a sound that primes them for the stage with other popular groups like Sabaton, Epica, Nightwish and Hammerfall, but you cannot really question the drive and effort that's gone into album, no matter the level of cheese it ever strives for. Well crafted, anthemic tunes will catch you every time, and nobody can accuse Berserker of lacking such.

Anton was sharp enough to once again hook up with a monstrous vocalist in Yannis Papadopoulos from Greece, who has that loud, frilly, powerful range but can also dish out a little angst and anger when he's staying in his mids or lower. He seems like someone complete aware of the emotion and spectacle that these 21st century power metal albums require as they attempt to almost out-accessible one another, but thankfully these guys aren't as cringeworthy as something like Gloryhammer. Sure, the cover model for this album looks like the planeswalker Ajani from Magic the Gathering, and some of the lyrics and titles can feel a bit generic, but I don't get the impression from listening through this that the band is trying too intentionally to come off as ironic or silly. They write massive material that draws equally from their Euro power peers and then a whole host of old 80s AOR and dad rock. You can hear the traces of stuff like Survivor, Europe and so forth, with those big old keyboard tones driving or emphasizing a lot of the action, but they get a little more meaty and musical when they go full-bore metal, and they also manage to pull off those softer, more sensitive moments like the verses of "Born Again" without getting too awkward.

The band does its best when firing on as hard as they can, with tracks like "Zodd the Immortal" and "The Fifth Angel", Yannis adding a lot of character there and every beat, riff and even keyboard feeling mighty. I don't imagine the festival crowds overseas finding it hard to fist pump their beers, because everything is well in place. Great leads that are both flashy and catchy, obviously holding just back from the precipice of over-indulgent excess. The only real drawback to this album for me was the fact that I feel like it should be so much more memorable than it is...while I'm actually listening to it I get the impression these are songs I'll have fun with for quite some time, and yet between exposures I seem to forget much about it. But if you pick me up and we're listening to this in the car, I'll let my hair down...the phantom hair...because all of mine is now hanging from the front of my face, and I'll sing along and smile. There are definitely a few things that hit you from out of left field, like how "Crazy, Mad, Insane" has those throbbing synth parts that sound like an 80s synth pop tune by Dead or Alive, and while this is the sort of overtly polished and pop-market-friendly I sometimes wish to scoff at, I think this absolutely crushes the entire Battle Beast catalog and it's a big step up for its architect.