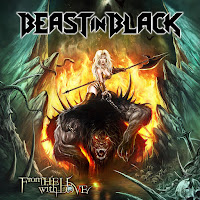 Although its formula isn't a far transition from that of the debut Berserker, From Hell With Love doesn't take more than a track or two to prove that it's already a better album than the debut. It starts off on a very strong footing with a full on arena rager, and then doesn't really let up as it cycles into its hybrid of chorus-grabbing power metal, synthesizer-heavy AOR and just the ever-so-slight breezes of proggier climes. This is all about those dressing up those enormous sing-a-long style choruses with competent riffing, lavish but tightly controlled avenues for shredding, and keyboards all over the place that play second fiddle to nobody, which becomes obvious as soon as the titular second track erupts.

Another curiosity is how they use a lot of the electric drum fills that seem like they're spun off the same 80s pop influences that the synths draw upon, they do such a great job of meshing that all together with the big chords and ever-improving performance of Yannis, who sounds on this album as if he's already cracked the all-time ranks of European power metal royalty. From Hell With Love is a veritable hit machine, and while it's apt to annoy anyone for the same reasons other groups like Sabaton would, it's honestly better crafted. As someone who was reared on a lot of hard rock at the same time I was delving into all the heavier, more evil and obscure metal, I can find an appreciation here because Beast in Black won't let me think any other way. 'This kicks ass...but it's soooo lame...but it's still kicking my ass. What is wrong with me?' I mean I'll be honest in that I don't really care for a lot of Anton's earlier band Battle Beast, I find myself nodding off at a lot of their riffs on the last couple albums...the singer's hot, but so what?

I've got no such opportunity on this album, because it demands attention at every curve, from the throwback synth tones that should have stopped being cool 35 years ago, to the elevating chorus progressions and the way it just revels in all its cheesiness and does not give a fuck. There are a couple moments where it might go a little too far, like the track "Oceandeep" where it seems to be channeling a bit too much Nightwish, but at least the first five tracks in a row thoroughly rile up the hackles on my ghost-mullet, and it does later recover with scorchers like "Unlimited Sin", or "True Believer" which once again goes for this outrageous 80s synth wave sound and then just layers on the butt rock, or "This is War" which reminds us that metal is still with Beast in Black and we've got nothing much to worry about...they were just kinda sorta testing our limits.

They've also got some cool covers on here, having the audacity to throw some roiling synths into "Killed by Death" by Our Lord Lemmy and friends, while keeping the vocals kind of nasty. "No Easy Way Out" from Rocky IV is probably more obvious, I mean the whole band's sound is meant to sound something like that, so why not pay it back? Add the sexy sword & sorcery cover art, the massive modern production and it's just a fun banger to spin as you cruise the city streets, but maybe keep the windows up since you don't want those friends who think you only listen to Pissgrave and Teitanblood to catch you.