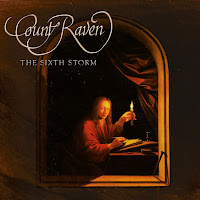 Twelve years have passed since the release of Mammons War, the last record from Sabbath-worshipping Swedes Count Raven, and for my money probably the best record they'd ever released. It had a more brazen, bright, slightly modern sound than earlier cult classics like Storm Warning and Destruction of the Void, but the concept was much the same, a quality continuity for a style that sadly the originators hadn't been peddling in quite some time (with the exception of 13). Big, catchy, traditional doom metal riffing, great vocals in that mocking, melodic, demonic Osbourne style that for me is like breathing air at this point; the memorable but mildly flawed execution that will creep me out more than most of the band's potential successors ever have, even the most distinct among them like the late Eric Wagner, or Messiah Marcolin.

In contrast to its predecessor, The Sixth Storm is somewhat of a dingier affair, darker and more evil, a  revitalization of their old style from the first half of the 90s. The guitar tone is certainly bulkier and more modern than it was those 30 years ago, and it's not entirely produced to go full retro, but definitely the vibes being spilled out here are more raw and mournful, a direct descendent to the Black Sabbath debut with a riffing profile that is slightly more airy and melodic, as we hear from the graceful leads in tunes like "The Curse". The tracks churn and groove along and it's all quite leaden and sublime, with laid back vocal lines that fully encapsulate what was so compelling about checking out those old 70s doom gods. The drums lay out strong if simple beats with some nice added fills that help add just a slight dimension of extra business to the solid, dependable rhythm guitars. Another parallel they have to their primary influence the inclusion of a more atmospheric, ambient vocal track in "Heaven's Door", which is clearly a little nod to "Planet Caravan" only with more shimmery organ/synth tones and just gives the listener a great place to trip out or relax in between the more oblique, drudging tracks.

Now for some, I realize that Count Raven might seem a little close to their forebears, but there are some slight instances of adding their own touches which I appreciated, like the creepy little synth lines they add to "The Ending", or the riffing on "The Giver and the Taker" which at some times sounded a little like an old chuggy Alice in Chains number with the difference in vocals, which for the record I really liked in that tune with the higher pitch going. There's also not a stinker among this entire lot, the first track might not be the strongest, and the closer "Goodbye" is a little much; but once you're hitting the titles I've mentioned above, or the epics "Baltic Storm" and "Oden", you'll be in full on appreciation mode for a band that, frankly, I hope we can hear from more often, because they are hands down one of the best to carry this torch forward. I hope that last tune isn't foreshadowing! They were always one of the most natural and familiar successor to the gods of doom, and the absent years haven't done them one ounce of disservice judging by what I hear on The Sixth Storm.