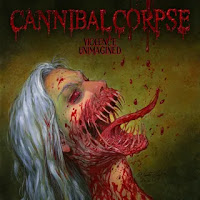 Cannibal Corpse is one of those acts whose audience seems to always fluctuate between static appreciation and stagnant indifference, so it's curious to see the raised level of buzz concerning their first full-length proper with Erik Rutan on-board as a full-time guitarist and writer. A lot of the chatter revolves around the different sound he brings to the band, and I'll admit that there's one area in which he certainly contributes to a mildly different experience, but I think ultimately Violence Unimagined falls right in line with the style has been exploring since Corpsegrinder joined the band for Vile, and it's one that some might continue to find samey and repetitious in terms of its riffing portfolio, and that others like myself will just continue to admire with each seasoned recording...this is not a band that really ever makes mistakes or half-asses anything, there have been a few albums that don't quite past muster, but Violence Unimagined is not among them.

Yes, you might hear a little bit of the Hate Eternal and Ripping Corpse bleed into Cannibal's forceful, thrash-inspired brutality, but I'd have to say that if not for some of his spurious leads, which bear a degree of distinction in the death metal community, most wouldn't really be able to glean a difference. And that's because, for all the time Erik has spent producing, touring and helping out with this band, he's gotten a complete grasp of what they're all about, and by no means is he out to step on any toes. This is business as usual, with the one exception that you might find a few of the rhythm guitar patterns a little more clinical, and the leads here to just be more epically fleshed and rounded out. He and Barrett remain just as synced as Rob was with Pat, but occasionally you get a dissonant, weirder, bouncier or atmospheric riff that feels more akin to what Erik would insert into his mainstay. But with Alex and Paul plugging and battering along beneath them, and George giving plastering his trademark, agile, syllabic guttural attack on top, you could probably mix and match some of these tunes in with anything from Kill to A Skeletal Domain to Gore Obsessed and be none the wiser, other than  perhaps a few production details.

And I have no problem with that whatsoever, because this band remains the posterchild for the planned, professional death metal assault which I can depend on year in, year out. Vince Locke's gruesome cover artwork is just as edge-worthy as its ever been, and the band supports that with loads of riff-intensive maiming and bludgeoning which I promise will never put you to sleep. There are some slight variations as always within the actual guitar structures, but all fall within a similar lexicon to what you've heard from the band post-The Bleeding, with just enough freshness to keep this one engaging even if you had been a little plagued with redundant feelings for some of its more recent predecessors. Now I'm not going to say this one has a load of absolutely unforgettable riffs; many are just permutations of their predictable, punishing backlog, but the chugging and feral thrashing that has clung with the band since its origins blend into some eerie tremolo picked patterns that will put you in carnage heaven. Paul's performance here is monstrous, the fills intensifying everything around them, and you don't need yet another of my reminders of how Alex is one of the best ever...I don't know that this style works without his swift and malevolent anchoring presence below the hacking higher pitched axes.

Persistence pays off again, and much of this material is set-ready to blend in with their other 100+ choice cuts dating back to the mid-90s. I did find the production a little dry, and like I said there isn't really a particular hit single here which stands out for me far above its surroundings, but rather the whole 43-minute experience had me shit-kicking my office and experiencing daymares of rending flesh, horrifying killers and apocalypses brought to you by the undead. And that earns my money. Every. Single. Time.

Posted by autothrall at 2:15 PM