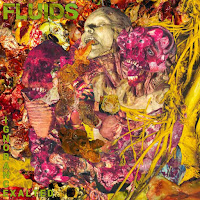 It was somewhere in that 2019-2020 range when word about this band really began to blow up my feeds. Maggot Stomp was a (rightfully) hot new label at the time, known for producing gruesome and catchy old school caveman death metal, and Fluids was one of its most hyped acts, at least in my recollection. So I gave the debut Exploitative Practices a spin, and just wasn't feeling it quite so much as I was Vomit Forth or Sanguisugabogg, but there was at least something tangibly grotesque and repulsive enough about it that I can understand the attraction. As you can already tell from the disgusting collage artwork that you'll not soon (or ever) unsee, there's a bit of a throwback here to vintage Carcass, only what results is more akin to the style that New York butcher squad Mortician popularized through their career.

Ignorance Exalted is pretty much par for that entrails-splatter course. Essentially you've got deathgrind slowed and reduced to its most primal urges...slow, chugging rhythms, hightly distorted over programmed drums that are just as ugly and raw. The vocals are a monotonous blur of gutturals which serve as this massive, ominous shadow over the grime created behind the super distorted blend of beats and chords. There is nowhere near anything resembling a catchy riff on this album, and so once again it begs that Mortician comparison, because for all the fun that band brings, it's not one you listen to for a couple tunes that are going to stick out in your head, but rather that overall effect of crushing sickness which gives you both a genuine feeling of dread and a bellyful of ironic laughter. I think the small difference here is that Fluids uses more of an industrial/electronic influence here on cuts like "Quartered", and they don't stick to the same sample parameters that those Will and Roger are so fond of. So this gets a more bizarrely urban and apocalyptic vibe to it, and sometimes the percussion is even kind of funny by its own right.

It's heavy as fuck, there is no debate on that, but I did find myself getting really bored because of the lack of anything interesting happening in the rhythm guitars. Even if the vocals might come across as generic, they're still very monstrous and effective, and I wish some of the riffs churning along below them would better catch my attention, rather than just seeming like the first patterns that come to mind. If the band transitions into blasting, it feels too stark and sudden and thus doesn't transition too successfully at all other than in the most rigid and modular fashion. There's also a gimmick with the song titling where they just use the past of some verb common to the brutal death metal and grind lexicon..."Capped", "Smothered", "Chunked", "Coerced", you get the drift; it's amusing for the first couple times, but then the commitment to the practice just doesn't seem to yield anything amazing. There are certainly some fun bits, like that messy lead in "Chunked" that I wasn't really expecting, and I think there's a TON of potential if they could keep this immensely oppressive sound and then write some earworm riffs to complement it, but I just don't know that I'm there yet.

Posted by autothrall at 4:18 PM