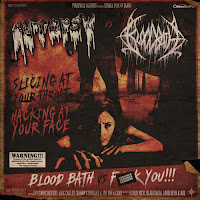 Beyond the fact that the Autopsy vs. Bloodbath split automatically warrants attention for featuring a pair of the genre's hottest commodities, gruesome US legends Autopsy and Swedish all-star retro-death masters Bloodbath, there's a bit more of a gimmick to this 7" in than might first appear. The Californians are covering one of their own member's old bands, also called Bloodbath, and the Swedes are covering the opening track "Blood Bath" off the debut album To the Gory End by the UK veteran death metallers Cancer. It's quick, it's silly, and it's more than likely to be soaked in viscera and rack up the cost of more than a few body bags in the process, and to be frank I rather like this kind of 'creative' vision for a collectors' item, rather than just a band pressing a couple tunes off an album onto 7" for shits and giggles...a practice that has thankfully become scarcer now that sales of vinyl are back in full swing.

Danny Coralles had been with Autopsy for pretty much all its full-length albums and the the vast majority of the band's history, so it's cool to them throwing up a cover for one of his early demo bands, and this one is taken from that Bloodbath's initial 1986 demo Fuck Society. As you might guess it's gnarly, fast-paced crossover thrash but now being given that additional splatter effect from Chris's vocals which probably give it a little more personality than it deserves, because the music for "Fuck You!!!" itself is bog standard and predictable in the rhythm department, with a nice, wild lead attached that is its only saving grace. It's also not quite living up to the horror/slasher elements hinted at by the cover, but this is balanced out by the far cooler Cancer cover by the Swedes and 'Old Nick' Holmes, which is meatier, morbid and ominous in a way that the original only brushed upon. In fact I enjoyed the "Blood Bath" cover more than anything off the band's most recent album of originals, The Arrow of Satan is Drawn. It's dumb, bludgeoning, evil with the little synthesizers, and Nick's voice sounds good and ugly and really drives it through the cemetery ditch.

But that's all there is to it...under six minutes of material, pressed by Peaceville and sent out to the rabid legions of fans, who will probably leave it in the sleeves and plastic as a curiosity to rummage through, and rarely will anyone listen to it. What I personally got out of this is that I'd love to hear Bloodbath record an entire album of old death metal covers, especially if they keep them from the lesser tier acts out of Europe and the US. This one sounds great and I'd urge every fan of the band to at least check it out streaming online somewhere. The cover image is pretty cool too, with that retro slasher vibe but I just don't know that Autopsy's choice even tunes into much thematically, and that gives a slight imbalance to the whole product for me, although I understand how it works into the 'joke' of the release.