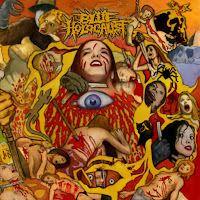 I'd like to point out that giallos and other niches within the medium of cult horror films are known for possessing unique, chilling and quirky scores that really tend to stick with the viewer or listener and help them identify nostalgia for that period and style. As well-intentioned as many extreme metal bands are, and there's no questioning their great taste in the underground or the extremes of cinema, I feel that a lot of the basics of a style like grind or goregrind simply do a disservice to such themes since they come across as puerile and spastic bursts of generic riffs that are played fast simply because they can be. Sure, both of these things have 'extremity' in common, but the one doesn't really reproduce the palpitating dread and shock of the other, no matter how many samples you add, or how much your lyrics stick to the script.

The Blue Holocaust full-length debut Twitch of the Death Nerve suffers heavily from this. Basically there is or isn't some sample of distress from a giallo/slasher film, and then a subsequent eruption into about 30-60 additional seconds of insanely noisy chugging, hoarse distorted snarling and growling, and whirring beats that have no musical value whatsoever. And then it happens over, and over again, across 32 tracks in 37 minutes. Sore Throat or Scum without the humor or envelope-pushing of their day. Now I understand that this is a one-man effort, so I'm a fraction more forgiving than if it was a full band equally devoid of any real ideas, but it still sounds pretty awful, even in terms of just seeking a purely caustic and visceral experience. There is not a single riff of any distinction anywhere to be had, and I'm simply not one that can ironically look past that fact and heap empty praises on the material when it has nothing otherwise to compensate. One could very easily write a few hundred tracks like this by plugging in and pressing 'record', offering up some basic programming and just hacking out anything that automatically filters out to your fingers on the guitar strings. I've seen it lauded as 'extreme' or 'sickening', but it's not at all beyond the cover pastiche and the musician's taste in film.

There are single guitar passages off Scream Bloody Gore from 17 years earlier that are more evil and extreme than anything Twitch of the Death Nerve has to offer. Mortician occupies the same style, but at least actually sounds heavy and oppressive. This is only about as menacing as obnoxious radio static. Even the song titles are generally just taken directly from the films to which this album pays homage. "Deep Red", "Black Belly of the Tarantula", "All the Colors of the Dark", "Four Velvet Flies", "A Lizard in a Woman's Skin"...even the title track. I've seen them all, and they all possess a haunting vibe that none of this music does. I will give a little credit that the lyrics themselves, while pretty standard for the brutal death or goregrind niches, are more elaborate than the music, so I think even they get a disservice here. I kind of dig the logo, and that collage of murdered women on the cover gave me the impression this might actually sound evil, but it doesn't...it's dull distorted noise at high velocity, spastic paeans to themes it doesn't ever earn. That being said, there's a second album which was put out much more recently (2018) called Flesh for the Cannibal God. It's not a far cry from this one in terms of style and substance, but it's considerably more effective and utterly leaves this material in the gutter.