Cradle of Filth - Cryptoriana - The Seductiveness of Decay (2017) 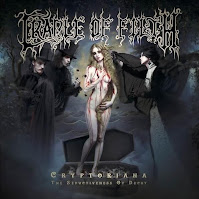 Hammer of the Witches in 2015 was a pivotal album for Cradle of Filth in that it garnered them a lot of the respect they had been missing since the 90s...for some of the prospective audience, maybe the respect they had always been missing. I enjoyed that one myself, not that it sounded much different than what they had already being steering towards since they 'righted the ship' in 2008 with Godspeed on the Devil's Thunder, but because I've always been a fan of the immense amount of detail and effort they put into the entire 'package' of their albums, and Hammer was no exception. Its successor, Cryptoriana - The Seductiveness of Decay furthered all that goodwill, even if it didn't generate quite the same level of buzz, and I'm going to admit that I like this one every bit as much as its predecessor, and appreciate that it's a sliver more atmospheric.

Insanely well-produced, Gothic black metal which is never shy on ambition, the album surges open with the thrilling, operatic "Exquisite Torments Await" and then never lets you free from its talons as you traverse its depths of vampiric myth and horror. In terms of orchestration and melody, I think this one does surpass the 4-5 albums prior to it. They very tastefully implement the choirs here seamlessly alongside blast beats and other bombastic swells of strings, horns, and other aural artifacts that populate their ceaseless Transylvanian/Victorian horror mindset. The guitars blaze along with plenty of riffing and technicality, sometimes bold enough to stand above the rest of the considerable arsenal, but just as often blending into the overall arrangement and structure...the point is, even if you're paying more attention to the eerie, angelic voices off in the distance, there's still a tasty little lick or lead that can impress you if you'll just isolate it, and as with previous albums the riffs themselves blend in a lot of heavy metal which you could trace directly back to NWOBHM gods like Iron Maiden, only sped up and amplified and thrust into the context of the darkness and narrative that this band alone seems to spawn.

It's big budget...lascivious Hammer Horror vibes translated into the cinematography of Dracula Untold or the Underworld series. Only with a little more substance than mere special effects and Gothic posturing by the attractive leads. Dani Filth plays his role as Snarling Laureate with aplomb, spitting out lines like 'She was the game, sublime' or 'The planchette is promissory' with a sanguine vigor between impish black metal rasps and his more death-metal-Martin-Walkyier guttural whispers and barks. There is no weakest link here. Marthus has become insane in his time with the band, just as adept as his formerly predecessors on the kit, and the fact that he's also so much involved in the synthesizers and general orchestration of the disc is critical. Guitarists Ashok and Shaw, who when you think about it sound like a pair of diabolic London occult detectives, work in perfect tandem, even where their tones are slightly thinned against the operatic backdrop. Lindsay might sound a little too committedly corny on a few of her vocal lines, which has long been a slight fault in the band, but she's certainly a little easier to take seriously than some of her own forebears.

It's not always the catchiest affair, and does suffer from a lazier or uninspired section in a couple of the tracks, but the amount of work Cradle put into this is unquestionable, and I'll always admire bands like this, proverbial shock rockers or visual artists who aim for a more imaginative package than your average four guys in black t-shirts at the bar. Not that there's anything wrong with them, mind you, but I've long enjoyed a good spectacle and these Brits rarely squander the opportunity to deliver us one.

Posted by autothrall at 4:04 PM