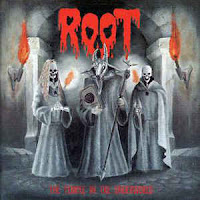 One of the best examples of parallel evolution in the black metal genre I can think of. While the Scandinavians were doing their thing, the Greeks were doing their thing, and Root was doing its thing, an immediately identifiable blend of thrash, heavy metal and occult black aesthetics that has to this day not really been rivaled or emulated. Big Boss and crew have one of the most spotless discographies in the field...perhaps not every album achieving masterpiece status, but there are few that I can't sit through and admire. Coming somewhere near the top of that pile for me is 1992's The Temple in the Underworld, a measured, creepy and ritualistic album which retains its freshness almost three decades after the fact. A band that was always a bit hard to track down in that most productive of eras, but with the Dark Magic of the Internet, none can now escape their gravitational pull...and why would any want to?

Doomy, expressive and inventive, The Temple in the Underworld thrives off its measured paces and big hooks, not to mention the enormous vocals of the incomparable Jiří Valter. Although he possesses some similar characteristics to the other notable black metal frontmen of his age, somewhere between a rasp and a guttural growl, he packs a lot more force behind his intonation, and when he hits the cleaner tones it just has this bombastic, masculine aura which feels like a stone giant howling down from the hillsides. But the guitars on this album are every bit his equal, with unique melodic lines in tracks like "Aposiopesis" and "Casilda's Song" that have a strangely uplifting vibe contrasted against the more freakish, wavy chants and whispers that Valter weaves between his more aggressive barks. Or how about that doomy, weirdo intro riff to "The Wall", swaying along like the morbid candlelight you always imagined this band would use in some ritual jam session. These Czechs sound like they developed their entire schtick in the cellars of some forgotten East European castle ruin, as part of some sonic cult that was hellbent on summoning denizens of the abyss through unique metallic compositions...and they STILL sound that way.

The album is clearer and larger sounding than its predecessors in The Revelation and Hell Symphony, with a richness and brightness to the guitar tone that marries well to the thundering kick drums which throttle along below most of the album's more intense moments. But they also dabble in ambience or their own take on 'dungeon synth' with a cut like "The Solitude" which is beautifully textured and quite unexpected, or the purely choir-based "Voices from..." which starts out timid until Valter just belts out this harrowing harmony that you can just feel humming at you from the dungeons. Acoustics are tastefully used, usually as intros to several of the tunes, but they contrast beautifully against the huge crunch of the guitars in a piece like "Message". This album is simply towering in all areas...maybe the bass doesn't do much of its own adventuring, but it sure sounds good throbbing along beneath the amazing guitars. Even among Root's own catalogue, this one is an anomaly of balanced dread and majesty, and there's not much I'd change about it. Maybe the full acoustic track "My Name..." goes on a little long for what it is...I enjoy some of the Big Boss ballads, but other than the vocals this one doesn't have much going for it. Otherwise, this shit is astonishing, one of the better albums in all of metal in 1992 and hasn't lost an inkling of its potency since.

Posted by autothrall at 4:08 PM