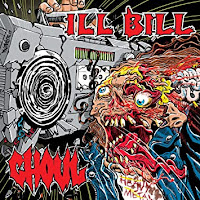 I have not kept up with the horror rap or 'horrorcore' subgenre of hip hop since the concept was introduced to me by groups like Flatlinerz or the Gravediggaz back in the 90s, so artists like Necro or Ill Bill have been entirely off my radar, until I saw this amusing idea for a split between the latter and Creepsylvania's death/thrash champions Ghoul. It's not the sort of team up you experience every day, and the hope for me was that the two acts would integrate one another's styles and make this splattery looking collectible a memorable trip to gory excess and some streetwise badassery, but the fact is that couldn't be further from the truth...this is just two entirely different groups doing their own thing with little regard for how it matches up as a product with the other, and the result is all too lopsided and obviously not in the favor of the rapper...

Ill Bill's track (featuring 'Goretex', and really, every fucking hip hop track these days has to be a 'feature' of some sort) is basically a mix of El-P sounding lyrical flow with beats and atmosphere that sounds a lot like the Wu-Tang Clan. It starts out with a pretty cool sample, and the production also seems like it'll be decent, but after about a moment it loses its luster and the rhyming just feels repetitive. It does sort of give off a horror in tha hood vibe with the synthesizers and effects, but the lyrics don't really hone in on the subject all that much and so one wonders why nobody told him to make it a little scarier. On the other hand, Ghoul's contribution, "Splatterthrash 2: Thrash Damage", is quite an excellent and explosive tune with a lot of energy behind it, a good sense for melody and I'd run it up against any single song on their most recent album Dungeon Bastards. Gang shouts, thrashing, jerking rhythms and the tune utterly beats the rap into a bloody pulp and it's not even funny. You'd might as well thrown a Boyz II Men track on the A-side and it would have the same effect.

Really, to make this work you'd have needed a pretty sinister sounding rap artist with a heavier cut, and maybe even some samples from Ghoul riffs or whatever. I appreciate that the two acts are friends or just mutual admirers and wanted to show their love for horror and splatter but it just feels like a gimmick. If this was a 7" with two great new Ghoul tracks I would have liked it infinitely more, but as it stands I can really only award most of the points here to the Creepsylvanians and hope that they'll toss this tune on the next full-length as a bonus track so most people can experience it in a superior environment.

Posted by autothrall at 7:03 PM