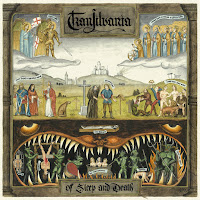 I'm a massive whore for blackened speed and thrash metal, and I make no apologies for that, nor should any be necessary, whether we're dealing with the most rudimentary Venom worship or bands that can elevate the sinister vibes of that hybrid to the next level. From all appearances, the Austrian act Transilvania seems to fall into this latter category, with some classical and classy-looking, creepy artwork which doesn't seem too typical for the niche, and a perhaps more varied approach to writing than those who usually blaze along with their (welcome) combinations of Seven Churches, Bathory, Welcome to Hell and Show No Mercy. The actual music here, upon experience, feels a little more like the purely traditional black metal once penned by Quorthon and his Scandinavian peers of the rawer persuasion decades ago, but there are a handful of more overtly thrash inserts here to keep it a fraction more diverse than it might have been.

Of Sleep and Death is certainly one for the conventional fan of vampiric, un-fucks-giving European black metal with its nasty edge and no sense of contrasted warmth or comfort. It's almost as if you devolved a band like Watain back a step to their earlier or mid-career material, but sent their mindset back a few centuries from its shock rock Satanism. And I mean that as a compliment to both parties, but you get the point...brash, dire melodic onslaughts of tremolo picked patterns or slightly dissonant chords that are accompanied by thundering kick-work and blasts that never border on the ridiculous, but ensure that there is this constant, oppressive sensation of being present at some East European war during the 15h century. The vocals are a nice, nasty rasp with some heft to it so it's a little deeper than the snarlier black metal bands, and he'll often throw in some manlier, hoarse shouts that help inflict some further personality. Once in awhile the way the bass roils around and some of the more playful melodies erupt in a tune such as "Hekateion", or the galloping title track, it's almost like a vicious take on a folksy influence, giving me a hint of the great Slovakians Malokarpatan, but this stuff is unremittingly savage in all cases.

Nowhere is this obscenely catchy or distinct, to be honest, since it stands so firm on the vile shoulders of its first wave black and thrash influences, but I think it benefits from the slightly unhinged production which prevents the drumming or the blood-drenched guitars from sounding too neutered or polished. I think fans of those first two Bathory albums who might seek such a style with a slight bit more focus and balanced mix will absolutely devour this one, but the ghoulish sincerity and belligerent mood might also sate fans of the Medieval black metal scene so strong in France, or really anyone who worships old Marduk, Dark Funeral, and their ilk. A keyboard or two is well implemented to help the listener meld into its cold castle walls of torture. There's a timelessness about it, much like some of its lyrical subject matter, which equally rewards with repeated listens, and it's something you could see as a modern cult classic to mirror the days in which this style sounded reckless and dangerous and totally malevolent to whoever it may concern.

Posted by autothrall at 2:50 PM