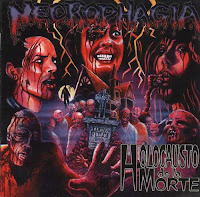 Holocausto de la Morte was kind of a big deal since it saw Killjoy and Necrophagia resurrected from the dead, and although it carries many hallmarks from their 80s thrash-tempered material, this was really the dawn of the peculiar, minimalistic and evil death metal style that this band will forever foremost be known for. It's also interesting for me because it's a good example of an album I had little fondness for when I received the promo for an old paper zine back in those late 90s, but as I listen with what I hope to be fresh, well-aged ears, I can garner a little more appreciation for what the guys were trying here. In terms of its place in 'horror metal', while its far from a novel example by this date, I think the almost constant use of samples and themes here makes it one of the first things I think of when those two terms are joined together.

The formula: extremely basic, crisp thrashing rhythms alternated with Hellhammer-style grooves, never sounding they took more than a few minutes to conceive, but slathered with personality due to the guts gargling vocal presence of Mr. Killjoy. I mean this guy literally sounds like he's chewing on a rodent as he intonates these lyrics...a rat or squirrel being gnashed in his teeth, his tongue flicking about it to make sure the words make it to the microphone with somewhat proper pronunciation. It's the kind of comical you might have first experienced with John Tardy or Chris Reifert, only arguably taken to a further extreme. And yet, I admit it's one of the most endearing and compelling components of this band. The riffs are also engaging despite how crude they come across, especially when they're drowned in all the morbid chants and samples and narrative that gives you a drugged out effect. Remember that movie I Drink Your Blood with all the evil hippies? This album sounds like you could layer it in as an alternative soundtrack to that and it would function perfectly. It's got a kitsch quality about it like bad, bloody, cult special effects and styrofoam graveyards and as I type these ridiculous things I realize it's one of the high points for me.

The production is also really loud and easy to follow consider what an evil atmosphere it is attending. The guitars and vocals always stand out, the former shifting between their doomed lopes, My First Thrash Riff 101 or even a little more creative dissonance. The bass sounds good, but doesn't do much other than hold up those rhythm guitars with a plumpness. The drums dwell in a simple rock format, almost like Danzig, but once again that is what this requires...nothing too technical to force its way past the rest. All the eerie segues and chants seem as if they're almost randomly placed into tracks like "The Cross Burns Black", but once you're attuned to what sort of experience you're going to get, they work. The band will also launch into a mid-paced blasting on tunes like "Deep Inside, I Plant the Devil's Seed", and I did feel that some of the riffs there felt like bland grind, but at least its worth it to hear Killjoy go even further over the top of the sepulcher than he normally does. All in all, though, it's fairly catchy, and while it requires a certain frame of mind for me to even want to put this in for a spin, I'll openly admit it's grown into a go-to album when I need my fix of the late Mr. Pucci's morbid hijinks. Whatever you might think of his music, and I don't think too highly of much of it, the guy was a one-of-a-fucking-kind splatter metal icon.

Posted by autothrall at 3:33 PM