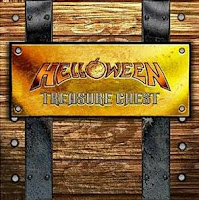 Treasure Chest is a massive 'fan package' sort of collection which aims to at least give the band's core fanbase something they haven't heard before, in the form of some remixes or alternate vocal takes on familiar tracks. The value of this one is somewhat debatable though; if you're picking up the 3CD version, there's a bit more to recommend, but even if you just grab the 2CD, at the very least you are getting all the tracks as remastered, and then some of those are ADDITIONALLY remixed. I am no fan of the long form 'greatest hits' sort of compilation, as is well documented, so I had to approach this one with some hesitation, but the promise of a few rarities put me in a moth/flame situation. I just hoped I wasn't going to get shocked too badly...

The remasters actually sound quite decent, smoothing over some of the production edges folks might have had with albums like Master of the Rings, Time of the Oath and The Dark Ride, but for the newer stuff this obviously comes with only minor adjustments. "Mr. Torture" never sounded brighter, but what I get a little confused by is that the levels and power of the tunes from different records don't really balance out here all that much, so if you're blasting through this on a good stereo it's just a smidgeon jarring. More interesting are how the older tracks like "Future World" or "Halloween" are approached, and they sound fine, but I think it'd be easier to judge them all on fully remastered original albums; the really early choices with Kai singing still sound the roughest and don't really benefit from being surrounded by the more contemporary material. As for the remixed stuff, you're getting a lot larger difference, especially on something like "Starlight" because this version is done with Kiske's vocals instead of Hansen's. I prefer the original because it just had the craziness and atmosphere, but this one's also a treat, whereas the remix of "Ride the Sky" actually also sounds pretty decent and loses little of that earlier aggression.

So it's a case by case basis, and I don't really want spend over 2nd a half hours on that, but most of the tunes are not at all unpleasant to listen to in these incarnations. Probably my favorite of the remasters was "Kings Will Be Kings", it just seems a little more powerful and atmospheric. Of more interest (initially) was the 3rd disc in the Limited Edition which is full of B-sides and rarities...some aren't really that rare when they were included on bonus discs on pretty common versions of the albums, like the stuff from the Master of the Rings bonus disc, and there are other tracks here like "Shit and Lobster, a bonus track from Pink Bubbles Go Ape which kind of sucks, and sucks even more to lead this off. The vocals sound way off, too loud, and while it's definitely metalized it seems like its got dull hard rock roots to it. The same could be said for "I Don't Care You Don't Care" and "Ain't Got Nothin' Better", the former of which is fucking terrible. The cover of "Electric Eye" is good, and "A Game We Shouldn't Play", a bonus track for Better Than Raw, is awesome, with those little symphonic and synth swells, great guitars and vocals, but these are at the end of the third disc and it's just too little too late.

I'm rather indecisive over all on this one...clearly it's the best 'greatest hits' OR 'rarities' package the band had released since The Best * The Rest * The Rare, but by no means is it necessarily worth tracking down unless you really wanna hear a few of those B-sides, and in every case I'd say get a version of the CD that already includes them. But I'm not going to trash it, because when you include all the work that went into the remastering and remixing, its clear that this as a product had some love put into it, just a lack of consistency when you take all three discs into account.

Posted by autothrall at 3:25 PM