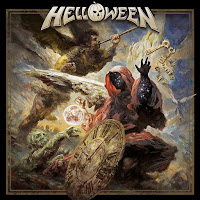 I think it says just as much about myself as this album, that it can be so damn well put together, and yet I'm still mildly underwhelmed by the result of something I was so anticipating. Is it simply the embarrassment of riches Helloween has provided me through the last three decades and change, that this labor of love hasn't quite connected with me as well as I had hoped? Are my expectations too high? Perhaps its the sense I've gotten that they've chosen to write a burlier, heftier sort of heavy metal record, with slightly smaller flashes of the technique and intricacy I've come to love, and a heavy reliance on the anthemic formulas that they, to their credit, were a huge proponent in devising in the first place. And it's an unquestionably strong record, of that I can assure you, maybe just not the unforgettable atom bomb of melodic European power metal that I'd suspected might champion its genre into the next era...

...which, to be fair, it might prove, for a lot of people. Note that 'underwhelmed' in the context of Helloween and myself, still means its better than the majority of what I've come across in its field, and I think that the main goals of what this record intended have been achieved. The eponymous title feels like an apt statement at this stage of their career, and not merely a self-assurance, even though they already used it on the 1985 EP. Eliran Kantor's artwork and its not-so-subtle callback to the early years is quite wonderful, perhaps belonging to that iconic pantheon that includes the first three full-lengths and Better Than Raw. The studio mix for this is absolutely bright and huge, with a lot of meat to the guitars, a near seamless balance of the multiple vocalists, and one of the highlights for me is picking apart who is doing what, where, because its fascinating. Yet the production still captures a lot of the smaller details and musical footprints on the edge of perception, that both crawl and vault around the brazen, boldness of the straightforward power metal elements that dominate the songwriting. Every musician sounds great, and what's even more impressive is how the egos have been displaced, all these guys sound like they're getting along so well together, complimenting each other without overshadowing. When it comes to the manifestation of the idea they set forth a few years ago, Helloween is a raving success, and I was never once distracted with any thought to the contrary.

No, for me, the sole reason this one hasn't climbed to the top of their catalogue is simply that the songs aren't always as memorable as they are 'on fire'. You've got your obvious attempts at writing proxies for past hits, like "Best Time" which is trying to play around in the "I Want Out"/"Perfect Gentleman" court, or something like "Out for the Glory" which feels like it should have been a lost track of Keeper of the Seven Keys Part II, something I'm sure a lot of fans were looking forward to, but it just doesn't have the stickiness of those older tunes, and has perhaps an all-too-familiar, ascending anthemic vibe that often feels like a mere shadow of an "Eagles Fly Free", despite sounding so much more meaty due to the modern production standards. Now, having said that, neither of these is a bad track...in fact I loved the riff in the latter where Kai spits out his impish lines. But surely enough, I found most of my favorites here came with a lot of the Andi-led tracks like "Robot King" and "Cyanide", which are quite awesome, but don't sound too different than what they've been doing for the past decade. "Angels" is another gem, a more symphonic and sweeping piece which uses both Kiske and Deris to great effect; and I had already been impressed with the advance single "Skyfall", which closes this one out, but once again inhabits a lot of safe terrain for those wanting a late 80s Helloween revival.

Helloween is very often 'good', and occasionally 'great', and certainly no expense was spared in terms of effort or its construction. There are 3-4 cuts here I'll happily add to my Helloween rotation, and not even one of the dozen that I'd consider even orbiting bad. I for one hope they can keep this giant lineup in place, that it's not just a one-off for an album and a couple shows, that they'll persist with these great personalities and voices of the past around to help flavor new ideas. This is no ultimate masterpiece, perhaps, but a positive proof of concept and a production marvel that shows a great love and respect for its audience, not merely the 80s gatekeepers, but those of us that have hung around the entire time. It's not exactly daring, it doesn't take many risks, and it lacks novelty beyond the multiple-singers, but this is still one of the greatest bands on Earth. So buy this, enjoy it. Buy a second copy and force it upon your friends and family, or even total strangers. Let them experience Helloween! And then toss their Billy Eilish records in the bin when they're not looking.

Posted by autothrall at 6:42 AM