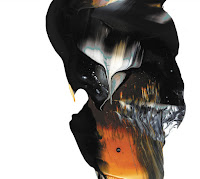 Normandy's Sordide occupies a go-between niche in which their material could be considered heavily steeped in the traditional black metal medium, with a few slightly more modern chord choices, and cultivating enough atmosphere that they can just as easily titillate fans of the post-black end of the spectrum, without dipping too far into the more purely blank-faced or navel-gazing pretentiousness or ennui. There's a heft and a force behind their riffing, to which they apply cascades of chords that often have that addictive, whiny post-punk or droning feel to them that makes this a band with a more instantly urban appeal than one you'd have howling at you from a wooded hillside, and when you pair this up with the bands social and political lyrics I think this is certainly a band very firmly and comfortably rooted in the 'now'.

Unlike a lot in the genre, the aggression here is driven more by the violent passion of belief than the cold iciness of evil and isolation. The compositions reflect this with their pumping, mid-to-faster paced gait, the vocalist howling along in a raw blend of rasps and growls that are well-fused to the thundering drums and constantly surging guitars. The bass on this one is also notable, it's got the weight and the volume to do more than merely anchor the other strings, and it adds a level of propulsion. The band does vary things up a bit with some slower tracks like "Ne Savoir que rester", and this is where they get a little cooler and more atmospheric, the vocals created with more effects and the measured guitar lines spiking in a little more sorrow; yet structurally you could even trace some of the rhythms back to the old lineage that ran from Hellhammer and Celtic Frost through Darkthrone...

Though they do sound great in doing so, and have just enough tricks to keep you guessing what might come around any corner, a few of the riffs do border on duller ideas that could use a little more to drive them along. The title track is quite good with this, arguably the most bewitching on the album, with some of those jangly, slightly off-center guitars splayed across its atmospherics, but sometimes as I'm listening to these tracks I constantly feel that there is just this hovering expectation something a little catchier will show up, and it rarely manifests. Still, for the relative simplicity of its structures, Sordide keeps each of the tunes just interesting enough to keep the mind occupied, and they're yet another band with a fairly distinct, if not wholly unique approach against the backdrop of a broadly diverse and ever fascinating French BM scene.

Posted by autothrall at 3:25 PM