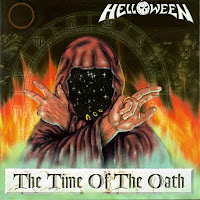 The Time of the Oath basically takes the ball that Master of the Rings kicked out onto the field and then maintains possession for well over an hour with another set of inspired songs that help prove that this is, score-for-score, one of the greatest bands that humanity has ever produced. Nope, the Andi Deris era was not going to be a fluke with just that one-off, surprising new LP that pulled Helloween from the brink of oblivion they had teetered on just a few years prior with Chameleon or Pink Bubbles Go Ape. The cover art was a little unusual, combining the Keeper from the earlier Kiske albums with the field of stars and rings from the previous album, I'm wondering if it was recommended to them to do something like this to try and help bring back the fanbase that might have abandoned them in the earliest 90s, a statement that the ship had been righted?!

As it turns out, such a thing wouldn't be necessary, because The Time of the Oath stands wholly on its own merits, or at least the ones the previous album established. Lots of heavy, thundering songs spiked through with the traditional melodies and harmonies on the guitars, and Andi Deris' voice which some might consider more fragile sounding until he starts hammering out the high points on opening numbers like "We Burn" and "Steel Tormentor". This is another album, though, that does not exactly hit you with the strongest numbers up front. Personal favorites include "Wake Up the Mountain" with its face-melting shred intro and an incredible progression through verse, glinting melodic pre-chorus and then a potent chorus which has never left my memory since. "Power" does bring back a bit of a Keeper of the Seven Keys vibe, but with that Deris magic replacing Kiske, and "Kings Will Be Kings" is an absolute scorcher, another chorus that just fucking flattens me. Even the goofiest track here, "Anything My Mama Don't Like", which might aesthetically seem like an error among these more majestic and epic power metal tracks, is really goddamn catchy despite all its flashier hard rock pizzazz. Nice little rebellion anthem though even if I was past my teens.

There is a little bit of a washed out feel to the production on this album, and it's one I think might have benefited from some further clarity, however don't let me mislead you into thinking that the instruments and vocals aren't front and center. There's a lot going on here, much like any modern effort in the Helloween catalogue, and I'm psyched that it all translates to my ears, but I remember thinking there was something in the mix that wasn't quite right. Ultimately, though, it's a nit pick, because the music is so wonderful that it more than compensates, and I was just so ecstatic at the time that we were getting this new era of the band that absolutely ruled...the 90s were of course a huge era for death metal, black metal, nu metal, alternative, grunge, and all that, but to hear heavy/power metal bands modernizing themselves to not only run with the changing landscape but also to CONQUER it...I'd take single riffs off this album over Pearl Jam and the fucking Goo Goo Dolls any day!

Posted by autothrall at 3:46 PM