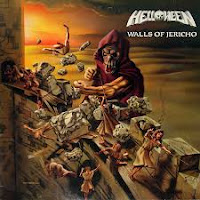 To try and drive home just how great Walls of Jericho was at the time it was taken off the leash, take a look at what else was going on that same year in traditional European metal. You had Running Wild's Branded and Exiled, Warlock's Hellbound, Grave Digger's Witch Hunter, and Stormwitch with Tales of Terror. All albums I dig, by bands I dig, one of which would even go on to put out a couple albums worship even more than anything Helloween has done, if you can believe that...but not in 1985. When I compare this record to anything sort of the outbreak of thrash metal around the same time, they almost all fall flat, whether it's that German scene of the time of heavy metal abroad. The iconic cover artwork, still one of their finest to this day, makes a great analogy for this album running up against the others in its field. There's both a raw intensity and level of songwriting polish here that must have been the envy of so many other metal gods in its day, and an atmosphere that one just doesn't simply forget...I will be in 2' wide, 6' deep afterlife and my skeleton will still be jabbering out "Ride the Sky" until it becomes dust.

Amusingly enough, while the style is largely comparable to the EP preceding it that spring, I'd say they had already lost a fraction of intensity. Not that the results are any less well-written or well-rounded, but there's clearly a more grounded approach that flirts more with conventional metal rhythms and then spins them off in its own direction with Kai's vocals, a sparse and effective use of keyboards, and a lot of fist pumping anthems like "Reptile" to go along with the EP-level onslaught of "Ride the Sky" or "Metal Invaders". The bass playing here is off the chart for its time, clearly Grosskopf was a fan of Steve Harris and Geddy Lee, who really made the instrument count, and Markus is all over this thing, and ever curve he takes, every fill STICKS THE LANDING. The drums might not have gotten as extreme as what was starting to emerge out of the newer, more sinister underground sub-genres, but Ingo Schwichtenberg sounds like a living storm, and when you combine the high impact percussion with that washed out 80s style of atmosphere created through the reverb and recording process of the time, Walls of Jericho just has a magic about it that isn't produced much if at all these days, one that's really only present in some of the formative works of other German power, speed and thrash metal acts like Rage, Paradox, Scanner, etc. This is one of the records that put Harris Johns on the map, and deservedly so, because the guy just had an ear for keeping metal honest and vicious without leeching it of its melodic potential.

The album is nowhere near as dynamic as its two better-known successors, but that's alright, this is the one you turn to when you want the molten steel Helloween and not the radio-ready version. It's like a more hyperactive Iron Maiden, all sped up but using the same penchant for triplets and melody, with this anthemic side to it which would prove almost as influential as the English legends. Certainly you take a track like "Ride the Sky" or "Guardians" and there are like a million other bands that would go out hunting for those same exact styles of chorus builds, only they'd probably lay on the cheese with more orchestration and a more 'professional' sounding singer. But that's another thing that stands out, beyond his excellent guitar playing, Kai Hansen's nasally, unique vocals. Plenty of range, but he sounds like he's a soldier battling his way through the apocalypse. I mean Andi Deris can get fairly aggressive with his own style later on, but Kai's just had an 'attack' to them, when merged with the meaner sounding riffs, that really immortalized him, and that aesthetic does persist with his own band Gamma Ray; he's awesome in general, but the nastier and more intense the riffs, the better the voice works.

People...this album has a badass song about a fucking PINBALL MACHINE from 1979...do I have to say anything more? They also took the intro from the Silver Shamrock "Happy Happy Halloween" jingle, which is based on "London Bridge is Falling Down". How cool is that for myself and the other fifteen people on Earth who enjoy Halloween III: Season of the Witch? What I'm essentially getting at is that anyone who doesn't like Walls of Jericho is not your friend, and you should not trust them.

Posted by autothrall at 7:19 AM