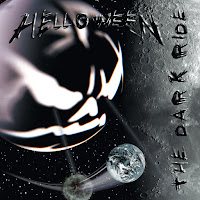 A lot of folks seem to get hung up on the title of this album, as if Helloween was suddenly about to put out a thrash or death metal album just because the word 'Dark' is in it. Sure, the cover art seemed rather ominous, the inky splashed logo and title font, and the earth circling around the massive obsidian pumpkin which seems ready to devour it at any moment, but in truth The Dark Ride has all the staples of the modern Andi Deris incarnation of the band, with the same penchant for glorious, emotionally resonant chorus parts and melodic guitars flying everywhere. In fact, over here in my neck of the woods 'A Dark Ride' refers to a haunted amusement park attraction, and even if that's not their intent with the title, it really fits how this one sounds. Yes, the lower end on the record is quite heavy, maybe the chugs or mutes pound a little harder than some previous albums, certainly on "Escalation 666", but it's not like they were about to take the stage in corpse paint and eat a baby. It's not macabre or evil, maybe just a bit determined.

This album fucking slays, and it totally exceeded even the high marks that were set by records I loved like Master of the Rings, The Time of the Oath and Better Than Raw. Most every track on this one burns itself directly into the brain and hangs out there for me just as long as a lot of their golden oldies in the Hansen and Kiske eras. As the swan song for Roland Grapow and Uli Kusch in the band, it's quite the achievement, and has arguably the most potent production of anything in their post-millennium era. "Mr. Torture" and "All Over the Nature" bring back that anthemic Helloween feel with their guitars and choruses, and while a lot of folks probably dislike "Escalation 666" for that gut-turning down-tuned chugging in the verses, it erupts into a great, proggy, atmospheric chorus which is one of the most engrossing on the album. "Salvation" and "We Damn Night" are both underrated masterworks, and then you've got one of the most radio-sellable songs they've ever written in "If I Could Fly", which I almost want to hate, but cannot, because its so obnoxiously catchy from the steady groove of its rhythm guitars to that little peak in the solo.

The Dark Ride is front-to-back exceptional sounding, with a thickness to the guitar tone that still manages not to obscure the considerable amount of melodic licking that Weikath and Grapow can shred into juts about anything. Uli Kusch also gives a beastly turn, and Grosskopf serves to really moor this whole thing in that lower, punching tone, which honestly isn't totally unique to this album...certainly I felt it on Better Than Raw and some of the albums after this. Andi by this point became my favorite Helloween vocalist, not because I don't love his predecessors, and not because he's 'technically' the best, but he had by this point shown the most consistency across the four albums, and he's always pleasurable to listen to because of the characteristics of his voice which can range from decaying fragility to a higher, siren-like plane of execution. He wasn't just chosen for his looks and stage personality, the guy is a powerhouse, and what way to honor the previous front men than by hiring someone just as unique. Kiske had four albums too, but two of them left a lot to be desired...nothing so far in the Deris canon left me dry at all, and The Dark Ride is hands down one of my favorite albums they've done.

Posted by autothrall at 2:04 PM