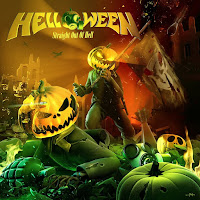 Straight Out of Hell is another of Helloween's modern albums to mix the familiar with the new, and to benefit creatively from the merging of the two. It's another album that I feel goes underappreciated if only because these Germans are an embarrassment of riches...they're a band so great in general that I don't know if most can process them at an appropriate level. Take just about any random song of this album, and you'll find it's extremely catchy, involved and technical, dynamic and varied, unafraid to pull from the wells of traditional heavy, progressive and power metal, or even to add in a few other modern strains of aggression like some of those almost djent-like chugs in "World of War". It's great to hear them so embracing the heaviness and not drifting off into the distractions that a lot of their hard rock roots often used to inspire.

I mean this shit is on fire, gunning for the 21st century just like they once conquered in the late 80s and then again in the mid-90s (in my opinion). Is there a power metal band in Europe with this much talent? Lost Horizon was on the way, but folded. Rhapsody went from two fantastic albums to a long catalog of over-processed sounding symphonic pap that, while still fun, sort of runs together too much. I mean the Germans still rule the roost: Gamma Ray, Primal Fear, U.D.O., Grave Digger, Rage, Stormwarrior, Blind Guardian and probably at the top of the heap is Helloween. If you don't believe me, I repeat again, just take nearly any track off this album and be wowed at the balance of ferocity and melody that they conjure up so effortless. "Nabatea", "World of War", "Waiting for the Thunder" and the title track bring literally EVERYTHING to the table, in spades. There are a couple songs here that step out of the mold, like the power ballad ("Hold Me In Your Arms") or the Queen-like arena thumper "Wanna Be God", but even these are very well constructed and the production is fucking insane. But the metal is where this one is at, and to that extent it rules...

I mean one tune is called "Asshole" which has totally goofy and terrible lyrics like 'Asshole/typical human being/you motherfucker/stupid shit you make me flee', almost to the point that I wanted to cringe, but the music itself is so amazingly performed, the melodies and vocals sound brilliant, and even that level of unnecessary stupidity I found memorable. Helloween just couldn't fuck this album up no matter how hard they tried to ruin it for themselves, because they're clearly on a musical mission to show that bands going into their fourth decades are by no means slouches. With experience comes great responsibility! I shit you not, this was an album that I once thought was pretty damn good on arrival, but has continued to grow on me to the point that I think of the 13 tracks, it's about 10-11 deep with sheer excellence, something for just about any of their fans, regardless of the era, and the audacity to actually say 'Hey, we've still got a few ideas left.'

Posted by autothrall at 3:17 PM