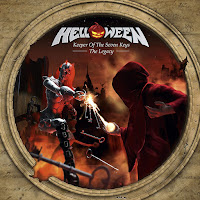 While I think I've communicated that a number of Helloween's later era albums have grown on me through the years, the opposite has actually happened for me with Keeper of the Seven Keys: The Legacy. Don't get me wrong, I still think it's a damn good album, ambitious and with a lot of songs to recommend, but it's not exactly the masterpiece I thought the first six months I had it. I also find the choice of title a little strange, I think it creates a certain expectation which this album is not interested in living up to, and maybe even an unfair expectation. Sure, there are a couple epic length tunes on here similar to "Halloween" or "Keeper of the Seven Keys" itself in "The King for a 1000 Years" and "Occasion Avenue", but the overall sound doesn't really reflect those classic LPs, and it might have been a better idea to wait for that potential reunion with Kiske and Kai and then released a Keeper of the Seven Keys Part III, not that they still can't do it, but the existence of this album with this title might muddle up such a trilogy.

That's really an aesthetic nitpick, however, because it doesn't dampen the quality of the tunes written for this. I've always likened this one to Six Degrees of Inner Turbulence: The Helloween Edition. Two discs, quite a risk to take since each is under 40 minutes, and with a little editing they could have just fit it on one. It's a 'double album' that didn't have to be. I also make that Dream Theater comparison, because this is clearly some of the more proggy or prog-minded Helloween material they were putting out in the 'Oughts, if only because all that space across 13 tracks begets a little experimentation. Now, that doesn't take on the form of using really bizarre song structures, or endless masturbatory instrumental sections where each member struts his supremacy over his craft, but there are a few new synthesizer tunes, riffs you haven't heard them use in the past, and other ideas which they were toying around here. Having said that, most of this is still a full-blown modern-day Helloween power metal album, it has a cleaner and less propulsive and powerful tone than Better Than Raw or The Dark Ride, but the emphasis is on heavier tunes that just incorporate a lot of the interesting new melodies, and then a couple of the more mid paced metal tracks aimed at radio play like "Mrs. God", which while quirky, is one of my least favorites here with the goofy funk bass line and clean Nirvana-like guitar at the end. Not funny! I also thought the "Light the Universe" duet with Candice Night was a bit sappy, but it does at least deliver once it picks up.

Of course, the double album's few mild missteps are easily forgiven for catchy ragers like "Pleasure Drone", "The Invisible Man", "Silent Rain", "The Shade in the Shadows" and the impressive "Occasion Avenue". Andi Deris spits out a lot of melodic chorus parts that really hooked me, and the musicianship of the rest of the band is as usual impeccable, even if it's a little more understated than some other records where the band is just blitzing on all levels. Production is professional and clean, but when I was listening to it recently it seemed slightly laid back. I'd say Keeper of the Seven Keys: The Legacy has about 10 very strong tracks, and while the rest of them don't suck whatsoever, it could have used a little trimming to be more emotionally impactful on me for the long term. As a Helloween album, it's strong and worthy of the exceptional run they'd been on since 1994, but as a 'double album', it feels padded out a good 10-15 minutes, and the title ends up feeling more like a marketing ploy since the content doesn't really tie back to the first two Keeper albums, at least not for me. Almost like the band wanted all the stubborn gatekeepers to crawl back to them, 'See, we're still good, guys!', when such a thing would be so unnecessary, because Deris era Helloween is fucking awesome. The double digits of great tunes here are just more proof into that pudding, but through the years it just hasn't quite held up for me like The Dark Ride or Master of the Rings.