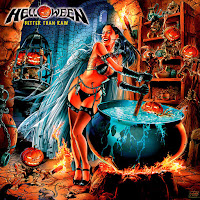 Even though the haze of nostalgia in my brain always equates this band with my favorite season of the year, the Autumn, I've realized that they have such a virile Summer energy to them, with very little mystical or spooky, and that's alright. Even the cover art of Better Than Raw, easily the best of their career, which just SCREAMS that this is going to fit that Halloween aesthetic, does not exactly come across in the music beyond the color, the fun, and the sexiness. Better Than Raw is another gorgeous, sexy beast of an album for the Andi Deris era, and it's yet another one that has actually grown on me through the years. You've seen me mention the same for stuff like Straight Out of Hell and Rabbit Don't Come Easy, but this one probably had the steepest incline.

It's essentially a beefier, burlier take on the style the band set out with Master of the Rings and Time of the Oath, but I think many of you would agree that the production here just sounds better. Not all the songs are quite as explosive or melodically intricate, but it's damn solid and offers an array of weaponry that keeps it interesting. The classical prelude is fun, and then "Push" levels you with the tremolo picked heaviness accompanying the shouted backing vocals, plus its melodic picking patterns remind me of stuff like "Sole Survivor". The album does get catchier though, tunes like "Falling Higher" and "Hey Lord!" scratching out some simple but really effective melodies that instantly infect. It's probably the later reaches of the album that took longer to grow on me, but I'm glad they did, because this is for the most part a dynamic and consistent and heavy album that retains its accessibility. If you were a newcomer to the band or even just the Deris era, I think most of this material would immediately sell you on the band's embarrassing riches of talent.

A couple cuts like "Time" and "Lavdate Dominvm" aren't among my favorites, but even then I can appreciate the care that went into them, the former a place for the record to chill out, and the latter a mix of their more driving classically-imbued style with some variation from Andi between cleans, growls, screams and backing choruses that almost sound like some weird boys choir at some holiday celebration. I'd say though, that about seven of the tunes here are just fucking awesome, with none of the remainder being bad. There are also some bonus tracks out there on some versions called "A Game We Shouldn't Play" and "Back on the Ground", which are exceptional, for my money just as good as any of the tracks that made the cut (although I had to experience one of them through the Treasure Chest compilation, but if you're tossing this album up on iTunes or something, edit those tracks onto the end...trust me.) All in all, another fucking knockout for this era, 3 for 3, maybe not as immortal as the 1985-1988 album trio, but further proof that this version of the band was just as worthwhile, AND ALSO IT WAS GOING. TO. KEEP. GOING.

Posted by autothrall at 4:12 PM