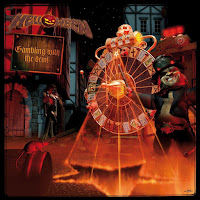 I really do like the idea of the 'dark carnival' with regards to all of Helloween's aesthetics in general...quirky and silly but with a more sinister and aggressive edge to it, and that very accurately describes the songwriting for Gambling With the Devil. Just don't look too closely at the cover, because from afar it looks good, but when you scrutinize the details it looks like pretty crappy digital art. Just think if they'd gone with a more classical, colorful illustration using similar imagery, in the style of Better Than Raw. Would have knocked this one out of the proverbial amusement park. However, graphic aesthetics are pretty much where my complaints end, because Gambling With the Devil is another hard-hitting wonderwork from a lineup that just won't quit.

Okay, the intro bit is dumb, but the rest of the songs proper rule. This album features what MIGHT be my favorite Helloween track of all time in "Paint a New World", which is for me the perfect example of taking those traditional power metal aesthetics and making them fresh for the 21st century. Passionate, fast, and moving in both its lyrical matter, heavy riffing, and fucking astounding vocals from Andi Deris. This is what it's all about with this genre, the ability to elevate you into a melodic plane so emotionally overwhelming that you want to fight, cry, and explode at the same time. THAT is the value of power metal to me, and while I don't say that I necessarily favor it more or less than the other sub-genres I enjoy, this is the uniqueness it brings to my collection, the void it feels, and I'm always happy to call upon it. Having said that, this one song does sort of leave the rest of the album in the dust, but as a testament to the quality of the album overall, I still love it, because matching an anomalous eargasm like that is just too tall an order for anyone, really. Tracks like "Final Fortune", "Falling to Pieces" and "I.M.E." all more than deliver the goods with memorable chorus, raging riffs and the same sort of viral energy. "Kill It" grounds us to dust with some of that showoff speed picking and very brief, hilarious 'extreme metal' growl, and "The Bells of the 7 Hells" has some weird stuff in it that leads to another climactic chorus with great backing vocals.

The album just has it 'together' more than Keeper of the Seven Keys: The Legacy, nearly an hour of awesome-sauce; there's really no chaff to be had anywhere, and I dig listening through the whole thing (first minute aside), even though you'll have to restrain me once "Paint a New World" starts, a Helloween track hadn't hit me quite that hard since "Sole Survivor" in 1994. The mix sounds great, with lots of synths and chorus vocals mixed in very well to accent the potent riff-set and lead guitar flares being set off all over the dark landscape. Andi has never sounded finer, and he even contributes quite a lot to the songwriting on this from the notes I've read. The newer members Sascha and Dani sound like they've already been in the ranks for decades, and this is the sort of performance which leads me to believe, that if the old-timers like Weikath, Grosskopf and even Andi had to retire from the band due to old age, as unthinkable as that is, Helloween might even be able to move forward in a positive way if they can round out the roster with newer talent like this. Helloween forever? Humanity could do much worse.

Posted by autothrall at 2:17 PM