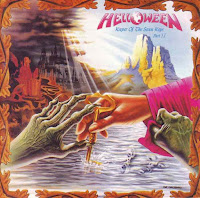 Keeper of the Seven Keys Part II is the back book-end for a time in Helloween's career that was and will always remain unique, over just a couple albums and as many years. There's a shared, optimistic and appealing style to these, with just a hint of silliness that didn't really ever become too stupid or get in the way. This album was also the home for the Germans' biggest breakout hit, and some of the most melodic earworms they'd ever pen, but it also doesn't lack the sense of ambition you felt on the first half, which was a fairly enormous transition from Walls of Jericho. Not only the presence of Kiske on these albums, which has an entirely different effect than Kai's style, but just the way the tracks are written. The fiery, rough-edged power/speed metal of their early years might still INFORM some of the songwriting, but this is quite a different beast, and while we can toss out 'the next Iron Maiden' platitudes all we want, this band really only shares a few characteristics with the British legends: part of Kiske's timbre, sure, reminds one slightly of Bruce, and the way they use a lot of mellower parts where you can hear the bass, while guitars are focused entirely on melody rather than heavier chords...but otherwise, this was its own thing.

Now the first Keeper is my favorite Helloween album to this day, for me that was where the magic intersected with my metal nerdiness the most. If I get that one 100-CD binder to bring to the desert island, that one is going in first. But this is a superb set of tracks to follow that one up, let by the supreme melodic overtures "I Want Out", "Eagle Fly Free", "March of Time" and another track that isn't talked about so much, "You Always Walk Alone", nearly as worthy. These would imprint upon hordes of European power metal bands that would later build entire careers out of sounding like that or at least using that as their core. Glorious vocal choruses where he hits his upper range, but still loaded with dextrous and varied riffs that would be entertaining to listen to even if it was the guitars playing alone. Grosskopf is also quite amazing here, the guy has such a confident tone and even in the more neo-classical bits, which are woven legion into so many of these tunes, he's plugging away with a lot of prowess. Ingo's drums are powerful and he's incorporating a lot of that double-bass that, as I've mentioned, really helps define 'power metal' for me away from the NWOBHM where this wasn't the focus. As fluffy and flowery as this niche gets, that thunder down under assures it still gets taken seriously.

I even like the silly songs. "Dr. Stein" is really the only dive into the 'Halloween' territory but it's also a little self-referential and endearing, where "Rise and Fall" is also tongue in cheek but just insanely catchy with those Queen-like vocal harmonies that still don't sound like much else they've done since. Of the entire 50 minute track list, there isn't anything I dislike, but one of my faves is obviously the swollen follow-up to "Halloween", which would be the title track of the duology of albums. I'll be honest, I don't have a fucking clue what "Keeper of the Seven Keys" is really about beyond the rather stock fantasy good vs evil tropes and maybe applying them a little to all of mankind's existence, but this is the track that's grown on me the most, from its acoustics to the 'epic metal' moments that escalate into the faster parts, the pompous narrative parts, the nicely flowing and elaborate chorus with those choir-like keys in the background. I like all the little melodic callbacks to "Halloween" in there too. Excellent, ambitious track that you can get lost in...it might not match its predecessor for me but I really appreciate it.

In terms of the overall response and exposure created by this album, I'd definitely point to this one as 'Patient Zero' for the exhaustive European power metal movement first joined by bands like the spin-off Gamma Ray and then may more into the 21st century. No, they didn't create it per se, Priest and Maiden and Accept and a number of others had their stakes in that, and many of those even took on elements inspired by their own descendants later in their careers. But in terms of taking those parts and putting them together into a single entity, stitched from myriad influences' flesh, these guys were the first off the slab. Perhaps "Dr. Stein" itself was prophetic! Keeper of the Seven Keys Part II, just like the first half, is undeniable, its charms inescapable.

Posted by autothrall at 7:20 AM