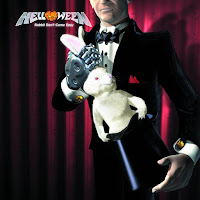 Rabbit Don't Come Easy is probably the only 21st century album in the Helloween catalog that I've seen some smack aimed at, and I can't quite fathom why, because I think it's for the most part another satisfactory expedition into that modern, anthemic style they launched into with the Andi Deris era, Master of the Rings and Time of the Oath. Do I like the tunes as much as those? Probably not, but certainly there was no effort spared here to come up with an impactful, well-performed set of tunes. I also realize that, next to Pink Bubbles Go Ape, this one has the silliest title and cover artwork, but it's not really all that bad...judging by this band's sense of humor, the title kind of makes sense and the artwork does at least fit it, my only question is the robotic hand and android look of the magician, but I'm sure there's some 'deeper' meaning to all that.

One of the best things about discography reviews is forcing myself to get back in touch with those albums from some of my favorite bands that I probably never spent enough time with, and this is absolutely one of those cases. Bought it day one, listened to it a fair amount at first, discussed it a little but it just never quite left the same mark on me as some of their others. Revisiting it now, though, I think it's pretty sweet, with some tight and powerful tunes like "Just a Little Sign", "The Tune" and "Never Be a Star", the last of which is cut from that same uber-catchy stock as a tune like "I Want Out" or "Perfect Gentlemen", in fact it does sound probably a little too much like the pacing and melody behind the latter, however the way the lyrics and vocal harmonies are fit over it is quite different, so it's not too big a deal. As I sit listening to it again, though, I can't say there are too many weak numbers...I mean the power ballad "Don't Stop Being Crazy" is no "In the Middle of a Heartbeat", but it's not so bad that I feel the urge to skip it. Even as deep as "Listen to the Flies" I'm hearing some vocals that turn my head. Some of the lyrics are rather generic and weak, but I think they're at least delivered with conviction because Andi has a ton of great melodies and harmonies throughout, and this is a solid exercise for his full range.

The guitar riffs are generally good, and it should be noted that it's the first album with ex-Freedom Call string-slinger Sascha Gerstner, who brought some youth back into the fold, and I think it shows with all the energy they embedded into this and its successors. Roland Grapow is not an easy man to replace, and I don't think this is the album where we can say we were definitively satisfied with that change, but this guy is beyond competent, and I can only imagine the thrill of transitioning from an act that many consider a bit of a Helloween-clone to the genuine article (not to sell Freedom Call short, they've got some good stuff), and as you'll see from future offerings, the guy isn't just here to fill a seat on the bus and dance around a stage, he's also a huge writer and contributor going forward, and he fits this squad like a glove. But overall, all performances are wonderful...it's not their most varied attack, and it's not as good as The Dark Ride, Keeper of the Seven Keys: The Legacy or Gambling With the Devil, but so what? Not much is, my friends.

Posted by autothrall at 3:09 PM