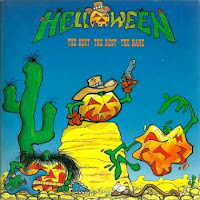 The Best, The Rest, The Rare really walks the line between being a total label-driven bullshit retread compilation and something that was likely invaluable at the time, for fans like myself who weren't able to get our greedy paws on all of its more obscure gems and B-sides. It was not at all difficult to acquire Walls of Jericho or the Keeper of the Seven Keys albums in the early 90s, I had already had the cassette versions for years and would soon pounce on the CDs once I got my first disc player as a High School graduation gift in 1992. So right there, I can tell you that about 50% of the material on here is just lifted from those and ported over so it can offer up a 'greatest hits' for a band that was still rather in its youthful phase despite already being into its second and more popular phase with Kiske singing.

We didn't need another pressing of "I Want Out" or "Future World", or even "Judas", but of course it's in the name of the collection, and I can't fault them at least for their taste because all of these cuts are all time favorites and highly memorable. At least going into it, we knew that the diehards would only be focused on that last third of the title, 'The Rare', and to that there were a few treats included from singles that I didn't own or hadn't even heard the B-sides of. "Save Us" was my favorite, a raging anthem with amazing vocals and guitar melodies that was surely among the harder hitting tunes the band had put out at that time, and that chorus part...simply put, this is one of my fave Helloween tunes to this day, so even if had to suffer the cash grab component of this release it was slightly worthwhile. The similarly titled "Savage" was another highlight, and another really heavy track that was pretty much a thrasher but imbued with those great harmonic vocals, and a catchy chorus. "Livin' Ain't No Crime" is decent enough if you love Keeper of the Seven Keys Part I, and "Dont Run for Cover" is also alright, but for me the weakest of the tracks that were unique to me when I bought this tape.

The one other gem here was the Kiske-sung version of "Victim of Fate", which worked very well, even if I still prefer the more acidic Kai vocals of the original. If you were a Helloween fan around this time, there was no chance you weren't going to pursue this, just to hear that 5-songs, EP length chunk of value, and for that very same reason, you also didn't need the rest of the stuff which you likely already owned. If you were brand new coming to this without any prior knowledge of the band, then you probably would have been attracted to almost all this material, even most of the worthy rarities, so from that angle it's not that bad of a deal. A bucket of vomit has more value to me than a 'greatest hits' comp of any sort, and I am well on the record for that, but again, this one is conflicting because they snuck on the good shit that you wanted with other shit that you already had... These days, The Best, The Rest, The Rare is far less interesting since most of its handful of gems are available on CD or other re-releases of their classic albums, but for 1991 I took the good with the bad, just skipped past the songs I'd rather listen to in their native original album environments, and enjoyed the ones I didn't have.