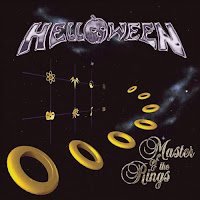 Master of the Rings might not technically qualify as a 'comeback' album, since the band never really went anywhere, but it as sure as fuck one of the best 'bounceback' albums I've ever experienced, the survivors of the Pink Bubbles/Chameleon Apocalypse reemerging with new members and an honestly fresh take on the power metal they had so pioneered through the 80s. If I complained about the prior two albums lacking in any real 'hit' power, Master of the Rings is almost nothing BUT tracks that hang around in your head long after the playtime has winded down. I picked this up instantly upon seeing it at the local metal section, and immediately thought they had done some kind of new play on the Seven Keys legend, but with rings instead. Little did I know that I would end up one day appreciating this even MORE than the second half of that conceptual duology that broke them onto the radars of heshers everywhere about 7-8 years prior.

This album has it all...the subdued synthesizers of "Irritation" explode into the knockout combo of "Sole Survivor" and "Where the Rain Grows", two of my favorite songs in the entire Helloween catalogue, and they were on fire with this inexhaustible energy they hadn't had in years. Blazing melodic riffs lead the charge, with Michael Weikath and Roland Grapow offering a wide range of attacks, with few misplaced notes and a song selection that's nearly as diverse as Chameleon before it, only this time it's all fantastic. But we really have to give some credit to the inescapable charms of Andi Deris, who crossed over to the band from the unfortunately-monikered Pink Cream 69, a band dwelling on the border between catchy heavy metal and sleazy MTV near-glam, who already had a number of good under albums beneath their collective belts, so it's no wonder this guy was an attractive choice. He's got much of the range of his predecessors, and yet a more silky intonation which is quite unique, and his performance here ranges from soothing ballads to atmospheric screams. What are the fucking chances that a band gets not two, but three amazing vocalists in its lifetime? If you think about it, that's usually something that only happens to the mega hard rock and prog rock acts.

Let's talk production, because it was quite different. There's a more modern, compressed bite to the rhythm guitars which feels like the band was joining a new century rather than attempting to just mimic their past works. However, they add some nice tones and effects to the leads that counteract the low end for some awesome atmosphere. This is a band whose leads can literally take an already great track to the next level. Markus Grosskopf's bass lines strut along happily, he's got plenty of room in that mix, and drummer Uli Kusch was another colossal pickup, coming over from, ironically, Kai Hansen's Gamma Ray. There was not a weak link among the roster here and despite whatever friction occurred later, this might have been the greatest pool of raw talent they'd assembled until arguably the recent Pumpkins United years. Ever cylinder is firing, from the gorgeous charging and chugging of "Still We Go", to the almost obnoxiously catchy "Perfect Gentleman" with its whistle-sounding melodies that almost come off like the anthem for a beer company; we're talking "I Want Out" level catchy. Even the freaking power ballad, "In the Middle of a Heartbeat", is a raging success.

What's more, if you got the awesome 2CD version from Castle Records, you got an additional 35 minute desk featuring a couple of leftovers like "Can't Fight Your Desire", which is nearly good enough to be on the album proper, as well as a trio of covers, my favorite of which is naturally Thin Lizzy's "Cold Sweat", but they do justice to KISS and Grand Funk Railroad too. It might be little more than an afterthought or a bone thrown to the fans to keep the sales up, but it feels pretty elaborate for a bonus disc...there's certainly thrown into the instru-metal shredder "Grapowski's Malmsuite 1001 (In D-Doll)", you have to imagine that might have been something planned for an album proper. I'm often stunned by some of the lukewarm reactions this album occasionally gets...I was hooked from the moment I laid ears on it, and these day's it's got to stand as one of my top 3-4 Helloween efforts with ease, and the beginning of an impressive 25+ year streak which had only a few fumbles. The diehards will always revere Walls of Jericho and Keeper of the Seven Keys, and sure, I am among them, but if I'm keeping count, this is the beginning of their most consistent and prolific era and some of its works demand just as much respect.

Posted by autothrall at 6:57 PM