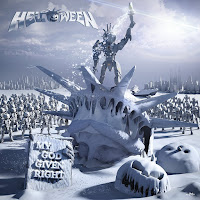 I'd love to know what the band was thinking when they came up with some of their cover art choices...a post-nuclear-winter New York City being ruled over by robotic pumpkin-headed snowmen? It's kind of a neat idea, although the digital artwork is a little cheesy and dated. I also like this version of the logo with the central pumpkin wearing the Statue of Liberty's crown. But you dudes are German! As for the actual musical contents of My God-Given Right, they are definitely not fooling around, because it's another solidly crafted modern power metal album with all the flourishes you'd expect: ace musicianship, polished and powerful production, and Andi Deris flexing his vocals all over the spectrum with another charismatic performance that continues to quell his doubters.

This one goes for the throat immediately with a bunch of harder hitting, anthemic pieces anchored by some pretty heavy guitars and drums, then just built upon with the vocal harmonies and proggy guitar leads. The melodies might not be the catchiest they've ever conceived, but if you're a fan of records like Master of the Rings, Time of the Oath and Gambling With the Devil then this one delivers that particular style in spades, with perhaps a bit more heft to the rhythm section in the mix. I think some of the most memorable tracks come a little further in, with the rousing, mid-paced "Stay Crazy" and that absolutely awesome higher pitched vocal line in the chorus, followed by "Lost in America", which might answer my question above about the cover choice when they're from across the pond. That tune has a pretty plain buildup, but another epic chorus and then some really awesome lead tradeoffs in the bridge. "The Swing of a Fallen World" is another contender here with a groove to it that felt fresh and unique amongst the Helloween canon, and "Creatures in Heaven", "Claws" and "Living on the Edge" will take you surprise once you arrive there...totally hook-laden and formidable.

When this one first dropped, I wasn't too terribly impressed when comparing it with a lot of their other post-millennium works, but it's certainly more than merely solid, and repeated listens have continued to reward me, so it's kind of a shower AND a grower. Then newer Helloween guys Sascha and Dani have really settled into the lineup at this point, and the former even writes a bunch of the songs and lyrics, so we're faced with a group that hasn't really had much of a misstep since the earlier 90s, and they just keep laying it on with quality effort after effort...it's almost the point that its become exhausting. Even where I don't fully connect to a track enough that its going to possess that timeless quality in my collection, there is no possibility I could sit there and listen through this one without thoroughly enjoying it. Approved!

Posted by autothrall at 3:18 PM