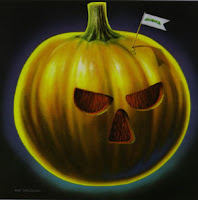 The only thing working against the original Judas EP was that it only had one new song to offer. A friend and I used to love these old Combat cassette issues of stuff like this or Celtic Frost's Tragic Serenades, we'd sit around on our skateboards in his basement, back when that was our thing, and just toss these things in the boom box and wonder. I seem to remember they didn't even have much by way of J-cards, or at least some of them didn't, they were just the cover and the inside of the cassette cover was just bare white. It wasn't an issue, but this one really stands out to memory with the simple mouthless pumpkin image and the green classic logo on the little flag sticking out from its 'brow'. I mean how could it get any cooler? A band that performed music this exciting, AND with an aesthetic connection to Halloween, our favorite day of the year?

These days most have experienced this one as part of that full-length compilation version which includes all of the original s/t EP, Walls of Jericho, and this one new tune, without the bells and whistles that were on the Combat EP. And don't get me wrong, that's the way to do it, you get the most bang for your buck and the official studio material of that era all in one place, with the exception of one track from the Death Metal 4-way split in 1984 they did with Running Wild, Hellhammer and Dark Avenger, and for all I know there's some other version that also includes that. But I'm approaching this for what it was, an EP or single with one new tune and some extras. WHAT a song that was, "Judas", another scorcher the likes of which you heard on those earlier releases. A fast beat with lots of double-bass characteristic of what drove the power metal general into its own niche beyond just the traditional heavy metal. Awesome bass lines and fills, and riffs even more rich and catchy than all the previous material. It's also just a little bit more evolved in the arrangement, with that pre-chorus and chorus perfectly placed, and it serves in a sad way as Kai's swan song as the front man with the band, since they'd pick up Kiske after this and Kai would focus more on his writing and guitars (but he wouldn't be able to avoid the helm for long!)

By far one of my favorite Helloween tracks, with the perfect ending where Kai spits out those elevating screams and it ends with that little swell of choir. There are two 'live' tracks from Walls of Jericho, "Ride the Sky" and "Guardians", and this was great as it was my first opportunity to hear the band 'live', and man did they sound awesome...nearly studio perfect? Probably because it was, these must just be the studio tracks, maybe washed out a little in the mix, with crowd noise added in. But at the time, I liked to imagine they actually sounded this great. The Combat cassette also had two tracks lifted from the original EP to flesh it out, "Victim of Fate" and "Cry for Freedom", which are arguably the most popular, so I guess if this was your first introduction it was offering a good pair of samples and then "Judas" to top it all off. Rating this thing is a little hard, because obviously I love the title track so, so much, and the cover, and have that nostalgia...but the other material is basically all a re-tread and it doesn't have much place as a product anymore.

Posted by autothrall at 3:20 PM