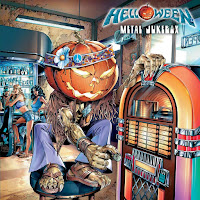 The idea of cover albums in power metal is no rarity; groups such as Hammerfall and Powerwolf have put out some pretty damn good collections, plugging their selections directly into their own sounds and ending up with something they could use positively to expand out their set lists and pay such tributes forward. When Metal Jukebox was first announces, I was naturally curious, since this was coming from a band that was a favorite of mine, and I wanted to hear what choices they'd make and whether they'd translate them into a proper Helloween feel or if they'd try to conform themselves a little more to the picks. I think, for the most part, they succeed in the former, with the caveat that this is nothing special overall and beyond its value of a curiosity, there's only about an EP's worth of material here I enjoy revisiting.

The opener is a scorcher, a cover of one of my favorite Scorpions tracks "He's a Woman, She's a Man", and the generally over-the-top Mr. Deris does a fantastic job applying his more schizo, crazy side to the original Klaus vocals without derailing it...plus, the slightly heavier approach with the drums and guitars really works on this one, and it's no surprise that it's probably one of the more obvious covers of the band you'd do beyond "Rock You Like a Hurricane", etc. ABBA's "Lay All Your Love On Me" actually comes off like a track from the Time of the Oath sessions...the production on the guitars isn't perfect, but adding the heaviness is awesome, and it's really atmospheric, with some great bass grooves. Focus' "Hocus Pocus" is a fun track to begin with, and while Helloween makes it sound even sillier than the original, it's still a damn fine cover and Deris really stretches his vocals here. Otherwise, there just aren't many that inspired me all that much..."Space Oddity", "All My Loving", "White Room", or Faith No More's "From Out of Nowhere", which is one of the bigger surprise inclusions, all do a decent job of emulating the originals and inserting Andi's voice, but they're all forgettable and taste-wise some of them are just too uninspired and generic as selections.

The others beyond that just aren't all that great, or a little disjointed and uneven like their "Locomotive Breath". Nothing here is terribly miscalculated, for instance even on some of the weaker covers they pull off a good guitar tone or vocal line, but it's almost like in showing the band's diverse influences and roots they end up making Metal Jukebox a less coherent or interesting experience. I've certainly heard far worse cover collections, don't get me wrong...as long as you're into the Andi era and a lot of classic rock and hard rock tuneage, you'll be entertained for enough of a window that you won't regret the experience, but I almost wish they had ramped up the intensity with a few more ragers like the Scorpions cover, or some better, highly arranged adaptations of stuff like the ABBA track. At least this is a superior diversion for Helloween fans than the lamentable Unarmed album about a decade later.