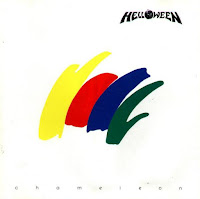 Chameleon is widely considered the nadir of Helloween's career, even more lowly than Pink Bubbles Go Ape, and I can entirely understand and even sympathize with that sentiment...but I don't agree with it. Like its esteemed predecessor, I had to find this one on import, because if the 90s musical trends weren't enough to stick a fork in the trajectory of a European power metal band, Pink Bubbles certainly was. Aesthetically it's another instant facepalm moment, the four splashes of paint and the quaint little logo placement and title font make this look like some sort of 80s prog pop album by someone like Paul Simon, Peter Gabriel or The Police. It does not inspire confidence, and it's not the only weird choice made for this album, but at least when I look at it I don't want to leap off a building like when I saw the prior album artwork. It's just a boring minimalism that only slightly matches up with the qualities of the music.

I have to disclose here that I do have a soft spot for Chameleon because it contains one track which I count among my all-time Helloween favorites, and that is "Giants". Atmospheric, gorgeous, and powerful, it has this more airy feel to it than anything I had heard them do before, but still driven with a great, heavy guitar riff and a similar anthemic melodic nature, just delivered in a more spacious format. That chorus sends an emotional chill right down my spine, the bass playing is great with the fills, it's got a cool orchestrated breakdown in the bridge, and there's just not a second I'd change of it, sheer excellence. And it's this atmosphere which actually extends across a lot of the album, also showing up songs like "First Time". This feels like a Helloween evolved (or devolved), for better or worse, and its offering something its predecessors didn't. It's not exactly experimental, but it definitely dips its toes into a little of the proggier rock that the cover hints at, and the band even tries some non-ironic attempts at pop or soft rock with cuts like "I Don't Wanna Cry No More", "In the Night" and "Windmill", and I'm not so much a fan of those, but the band does a reasonable enough job with them that I can't bring myself to hate it.

Other cuts like "Revolution Now" bring in a bluesy, Zeppelin hard rock influence and mesh that in some some of the spacious, acoustic moments and it's at least catchy the first few times through. It's almost like Chameleon is trying to live up to its namesake, and that is ultimately one of the reasons I still count it among the lower rungs of their studio efforts, because it's all over the place, and other than the general mood created by the production, it's often incoherent. Like with Pink Bubbles, I could put together a good EP's worth of material that I like to revisit, and an even better one here ("First Time", "When the Sinner", "Giants", and "Step Out of Hell"), but it's really not one where I find myself ever wanting to listen straight through. "Giants" will always remain in my Helloween playlist, but I don't think anything else here is quite so vital to me. Certainly I could understand how so much of this was a turnoff for a lot of fans who were probably already dismayed with the fourth album and were digging Helloween a plot that was two feet wide and six feet deep. As history would dictate, though, nobody should've been too quick to lay on that topsoil.