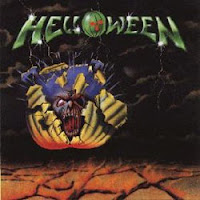 Ah, the original EP with the green logo and the hideous face inside the smashed pumpkin. Helloween has evolved so much through it's 36 years that occasionally I forget just how good they were in the first place. In the middle of the 80s they were arguably aggressive as they'd ever be, and that was the rule, not the exception. Sure, they've had plenty of fast and comparable tracks throughout their catalog, but most of the stuff prior to Keeper of the Seven Keys gives off a vibe very similar to a lot of the other speed and thrash metal acts of the time, only with the catch that it was much more precise and I daresay even technical. I often liken this s/t EP to the earlier Exciter albums, or a lot of the old stuff populating the rosters of Combat, Noise and Metal Blade, only Helloween played it faster and with a virtuosity that was dizzying when I was a kid.

It's not always going all-out in the mph department, but the 27 minutes rarely ever let up, whether it's the frenetic and head-spinning of "Starlight" and "Murderer" or the trotting Maiden-on-Crank of "Warrior", the last of which sets up a lot more Gamma Ray than you'd think. I'd say for most people, "Victim of Fate" is the best known track here, it's certainly got the catchiest chorus with the vocals that shift into that scream, and then that mellower breakdown (again, very Maiden) with the whispers, but this one's not much less savage than its neighbors, just a fraction more melodic and built to be the classic that it has become. "Cry for Freedom" is also worthy, the soft intro escalating into another frenzied melodic piece with the great chorus vocal accompanying the shrieking. Obviously one of the most distinct features here was the vocal ability of Kai Hansen, who had this pinched, nasally timbre, with plenty of range to it, but definitely rough around the edges and coming across almost as psycho as stuff Slayer in the day. His narrative stuff is also a treat as he's snarling and growling out the lines before the bluesy lead busts out in "Victim of Fate"; another trait he'd use again in his post (and pre-) Helloween output...

Most people forever equate the band with Michael Kiske due to his presence on their breakout albums, and Andi Deris has had his lengthy and iconic presence within the roster, but it's hard for me to put either of their styles above Kai's...nd when you add his incredible guitar playing and songwriting abilities? Fo'get about it. Kai is the True Metal God+++ of the Helloween canon, and there couldn't be a stronger initial exhibition of that than this EP. That's not to say the others are slouches...Michael Weikath matches his playing quite well, and contributes to the writing. Markus has always been a bassist's bassist, playing to the song but managing to get a few hints of his own skill level, and poor Ingo was highly energized here with fast beats and fills that support all the mayhem. Like so much of the material put out during the 80s, this one sounds eternal, I don't think it has aged at all as I listen through it again; Helloween remains just as exciting and 'next level' and awe-inspiring as I felt when I was a kid, and its still as great a place to start as any in their catalogue.

Posted by autothrall at 3:22 PM