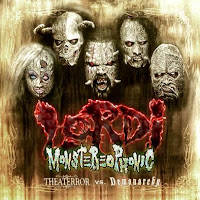 Lordi is a band I denied for several years, shrugging them off as a mere GWAR knockoff. As it turns out, this was shortsighted and foolish; as my fondness for shock rock has only improved with age, I decided to return to their discography and discovered that I like quite a lot of their records, not the least of which is their 2016 opus Monstereophonic (Theaterror vs. Demonarchy), a mouthful of a title which is really to signify that this is sort of split into two albums; the first half representing some more fun-oriented, goofy party tracks and the latter half encompassing a miniature concept album in which the music gets a little more serious, technical and almost transforms into Lordi's answer to the rock opera.

Now, on one level I was not mistaken with the GWAR comparisons...certainly the band's elaborate prosthetics and stage get-ups, while not taken to the same extreme, are comparable to the Scumdogs of the Universe. Mr. Lordi's meaty, gritty vocal style also highly resembles the late Oderus Urungus, if a little more sustained and gravel-chewing. They occasionally also strike the same general level of heaviness, while remaining accessible to a broad metal audience following several genres. But where GWAR was rooted more directly in punk and thrash, Lordi have evolved their shock rock ambitions into a panoply of thrash, heavy metal, groove metal, rock opera and 80s hard rock complete with a heavy use of dated synthesizers that remind me simultaneously of cheesy AOR tunes and stuff like the intro to Ozzy's "Mr. Crowley". That they are able to assemble all of these aesthetics into one seamless whole is impressive, especially on this 64 minute, 14-track juggernaut upon which there isn't a single tune void of some extremely catchy riffs, chorus lines, or arrangements.

It does start off a little corny with a narrative horror intro and then "Let's Go Slaughter He-Man (I Wanna Be the Beast-Man in the Masters of the Universe)", which, if you couldn't already tell is a childhood relation towards the villains in the He-Man universe. It's not that I didn't once share this same sentiment, but the lyrics here are dumb as rocks. Likewise with the cringe-worthy sex anthem "Hug You Hardcore", focused exclusively on rear entry. Now, ironically, the music in both of these tunes is quite good...the former a synth-laden hard rocker which reminded me of their fellow Finns Twilightning, and the latter a super groovy rock track with a simple but unforgettable riff gimmick that I'm surprised nobody had ever tried before. So yes, despite their lyrical shortcomings, neither is a track I'd ever skip when listening through the album, and it's no wonder that "Hug You Hardcore" is their choice for a video, which strangely seems to feature more of a slasher theme and doesn't much have to do with the words...whiiiiiich, might be for the best!

After that point, while a few of the lyrics might still be plebeian ("Down with the Devil"), the rest of the music is quite excellent, with a huge dynamic range, from the slow and grooving "Mary is Dead" to the dirty heavy metal of "Sick Flick" to the power metal that inaugurates "Demonarchy" itself. The arrangements of the tunes are just about perfect, with lots happening through the synths and other instruments, but the ability to still come together for an amazing chorus. They employ a few higher screamed vocals which create a cool contrast with Mr. Lordi's usual tone, and maintain a kind of modern, creepy haunted theme park feel throughout. Production on the disc is polished but really perfect in allowing the listener to experience every intricate note, with nothing too loud or muted in the mix, no mean feat when you consider the wide range of riffs on exhibition. That the album goes over an hour without ever firing off a misplaced measure to me is staggering, perhaps not every riff or line is unique, but assembled together they offer quite a substantial window into shock rock contemporary and future, and Monstereophonic is a much less silly than it looks. Far less childish than its early attempts to derail itself. A whole lotta fun.