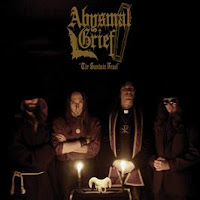 Abysmal Grief is one of those perfect bands to break out this time of year; its brand of horror occult doom metal generally satisfies on two levels, the genuine darkness and gloom you'd expect from its genre, and the slightlier campier vibe coming through the visuals and some of the sounds and samples they spruce up the guitar-driven doom with. From the onset you might expect a funereal vibe, which you do get through some of their costumes, all of the lyrical subject matter, and the consistent use of organs, but the music often has much more of a rocking nature to it which wouldn't be out of place for some US stoner metal bands. Italy actually has long had quite a thorough horror metal scene, so it's to Grief's credit that it manages to remain distinct from show-metallers Death SS, giallo fiends Mortuary Drape and Paul Chain's extensive repertoire of psychedelic purple excellence.

Having said that, The Samhain Feast is hardly the golden apple in this band's orchard of rotting sadness. With just two tracks that largely pursue the same style, it doesn't really offer up enough room for the band to really absorb you into its aesthetics. The thick riffs, cruising along with an almost Hellhammer-meets-Nebula guitar tone, are very bare-boned and predictable, in particular for the title track which has a chord progression similar to a dozen or so desert rock tracks you've already heard. Drums shuffle along at a simple pace, with just enough fire in them to support the heavier guitars, and the listener really has to lean on the haunted house organ lead aesthetics and the deep, wavering creep-out vocals of Labes C. Necrothytus to win the day. To give an accurate description of his style, think somewhere between Jari of Root and Lee Dorrian from Cathedral, those flawed but unforgettable lower cleans which care nothing for being perfect, but accurately casting the audience into its world of wraiths, specters, catacombs and coffins left slightly ajar.

Some riffs are better than others, and I'd say that "Grimorium Verum" is the superior of the offerings here, especially where the guitars hit that late bridge riff and the lead breaks out over it. That one also sounds a little more Hellhammer due to the riff makeup, thus automatically more evil! Production on the EP is appropriate, with a very dark, molasses-like consistency to the guitars, and a shadowy murk through which no light penetrates, even with the female near-whispered narrative and the brightness that the organ usually brings as an instrument. Both the tunes are acceptable rockers, without being particularly interesting or inventive, but I definitely don't think this is the sort of format in which these guys can really bring their inner pallbearers to bear upon the audience. Instead I'd make a recommendation that new listeners head straight over to one of their first two full-lengths, the s/t and Misfortune to get a better portrait of what this Italian underground staple is really all about.