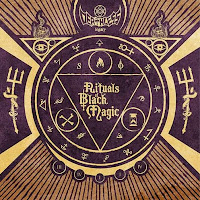 For a band that essentially started off as a loving paean to Italian countrymen Death SS, the similarly dubbed Deathless Legacy has certainly come a long way unto its own with this fourth album, an incredibly professional sounding effort which seamlessly integrates orchestration with simplistic, heavy guitars and a vocalist with a lot of character to drive home the occult horror themes which inspire them. It might be a little hard to pin down an exact style for this five-piece, it's a sleek, polished, modern approach which could service a cross-section of Gothic, heavy/power, shock rock and possibly even some groove metal audiences, and all the power to them for managing to land a firm identity, keeping their horizons open without ever coming off like some 'please everyone' hybrid that you find a lot in contemporary metal.

You'll instantly notice, upon first spinning the disc, how well the symphonics and choirs have been produced here, impressive since they're largely the work of a single keyboardist. Whether on their own or being used to decorate the straightforward, brutish rhythm guitars that populate most of the album, they feel so well-tuned and well-constructed that you really feel like you've spent a night at an opera which was crashed by some Ozzfest rejects, and I don't say that as an insult. As for the riffs themselves, they don't quite hit nu-metal levels of generic bounce, but there's not much to them other than serving as a foundation for all of those synthesizers, synth leads and the vocals, lower string chords most of the time with a few grooves and fills. Occasionally they'll infuse some higher pitched speed picking stuff that gives an impression of anthemic 21st century European power metal, but the majority of the time they are the element of the record that's striking the listener in the gut while the other trappings are more evocative of the imagination. Some slightly rave-like electronics are also incorporated into the harder riffs, so this isn't just some Gothic horror act living entirely in the past, even if the lyrics and overall imagery seem to point that way.

The real star of this morbid musical cinema, however, is Eleonora Steva Vaiana, who has a lower pitched, evil, wavering vocal style which so fluidly suits the punch of the music. At the cleanest of times she sounds like some sultry which summoning a hex, but she can also get even nastier with a near-rasp tone to accent a few of the lines, and kick in some power and sustain to the chorus lines. I'd liken her to an Agnete Kirkevaag of Madder Mortem, or perhaps Italy's occult scream queen herself, Cadaveria, but she totally makes this album, leveling out whatever elements you might find too overproduced or cheesy with a passionate and shadowy delivery that makes it difficult not to take seriously. Elsewhere, the band shines, with great drums, solid bass-lines, and a bevy of other instrumentation like the acoustics of "Vigor Mortis" that sound crystalline in execution. All of these are mixed in a beautiful balance that can go toe to toe with most 'modern' metal recordings in the fields of Gothic and power metal, without sounding too shallow or commercial.

It's not perfect, as some of the predictable guitars and symphonic melodies don't leave much in the way of a surprise lurking around any surface of this haunted opera. The music in general, while so painstakingly well produced, would not often be that memorable save for Steva's presence, but as an entire package it sounds great, and it casts such a potentially wide net that I could recommend it to fans of bands as varied as Nightwish, Benedictum, Ghost, Powerwolf, Cradle of Filth, Devilment, and of course their spiritual precursors Death SS. A good, solid album to pump out the speakers, not so much for metal seeking filthy, raw, flawed evil sounding material, but certainly could impress a lot of the squares and commercial metal receptacles who are more likely to let it find them than go out hunting themselves.