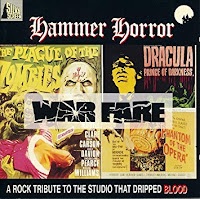 Warfare's fifth proper full-length was such a bloody good idea at the time, or really, at any time: a British metal band paying tribute to an institute of British horror films. Beyond that, Evo and crew were not about stretching their sound a little, hamming it up with some synthesizers and atmospheres that took their street level thuggery into the funeral parlors, the haunted castles, and sundry other environments in which you'd usually place a Hammer Horror flick. Now, I want to disclose here that I am covering the 1991 reissue of the album, which featured more tracks to it as well as a better production than the original Hammer Horror from the year before. It's likely you've seen that one with its original cover that featured doppelgangers of Christopher Lee and Peter Cushing against a moonlit castle backdrop, kind of a cheesy but cool image, but don't be fooled...this newer version sounds superior and has a lot more to offer, the one exception might be if you're a die hard puritan for original versions only and are willing to take the bad with the good.

At any rate, Warfare perform a grimy form of speed metal that builds off a similar momentum to a Venom, Motörhead or Tank, but here on Hammer Horror you can tell they were aiming for a more structured thrash nervous system on which to apply all the bells and whistles of the concept. The riffs in tunes like "Baron Frankenstein" almost have a simplistic S.O.D. or Sacred Reich mosh style to them, interspersed with some darker pure old heavy metal progressions. To contrast against this, they use a lot of lavish intros that feel like they're plucked straight from imaginary cult horror films, the organ tones or the acoustics used briefly to frame up the next track, although they'll also throw you a big curveball like "Phantom of the Opera" which is almost all this spacious, atmospheric, theatrical sounding tune which is only borderline metal, features male/female dual vocals and other things you just wouldn't expect if you'd come at this band from their older albums. Normally, the vox are a dirty style which at times reminds me of Cronos or even Ron's garbled barking in Coroner, but he also uses a lot of straight talking, blander narrative lines or others that sound like someone with a tummy ache being tossed out of the local pub by bouncers. It's charmingly pedestrian in places, but also fairly scatterbrained and inconsistent.

This also goes for the riffs...it's a little difficult to really get involved with the better, harder hitting guitars when they're rubbing elbows with super cheesy, slower punk picking parts as in the verses to the "Scream of the Vampire" tracks here, which are strangely divvied up. The album seems to be split into three chunks: the large amount of intros and interludes, the harder headbanging cuts and then the broad epics like "Hammer Horror" itself which actually do a good job at capturing a guitar-driven sort of soundscape to a perceived film from that time and scene. There are a number of good tunes throughout, like "Plague of the Zombies" which is just some mid-paced, ballsy metal; or the title track I mentioned, or the brief "Ballad of the Dead", but others like the woozy slow dance number "A Solo of Shadows" are almost entirely laughable, though I get the feeling the band was right there laughing along with us when they were laying them out in the studio. As far as its pure metal content, I think the stuff is pretty good, some of their best in fact, with strong licks and cool atmosphere.

The issue is just that it feels a little bit TOO corny and inconsistent to really squeak out more than a barely passing grade. You have to think, at this time we already had an act like King Diamond or his Mercyful Fate putting out one masterful record after another, with more coherent narratives, more complex and interesting and memorable music, so Warfare's approach felt a little too blue collar or primitive; nor is it even as interesting or unusual as something like The Exploited's Horror Epics, and its weird punk industrial metal death rock fusion. That aside, this is a delightfully goofy romp with some genuine good metal moments...just not enough to terrorize its way into greatness. And at the very least, we know Warfare had some ace taste in movies.