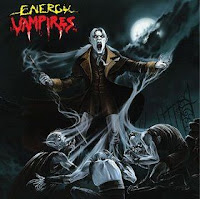 Energy Vampires are an interesting little obscurity from the Midwest who published an album-length demo back in 1991, to little or no fanfare. But knowing what vultures we have all become for such antiquities, Shadow Kingdom snapped this up for an 2008 reissue on CD and vinyl, and I think it's one that might have limited appeal to fans of classic US heavy metal or USPM of the variety you'd hear in the mid-80s from the Metal Blade roster. The band's frontman, John Stewart, who also fronted the heavier, comparable act Slauter Xstroyes, sadly passed away this summer, so I thought it was a good time to shine a little sunlight on these blood sucking hairspray addicts that might have damn well made bigger ripples than they did had the market not been so oversaturated by the time they arrived in it.

I'm assuming the band drew its name from the LaVeyan concept of a 'psychic' or 'energy' vampire, or perhaps the film Lifeforce or some other source I'm forgetting, but regardless, they played the sort of heavy/power metal with excessive vocals characteristic of the 80s US scene, which makes a lot of sense as a followup to Stewart's alma mater. From the 'official' pics of the band, they definitely had a glam look to them, and there's also a bit of a nasty hard rock feel coursing through the music, most reminding me of Mötley Crüe if they'd stuck to their guns and gone more pure heavy metal through the remainder of their career. However, this is largely the sort of driving, anthemic riffing you'd equate with other bands of that region like Shok Paris, Breaker or Destructor, predictable in terms of the chord patterns, but always just messy and unhinged enough due to the way Stewart threw his vocals up over the metal. This s/t can be a bit of a clamor, especially where it gets the most ambitious in a track like "Pull the Stake Out" where they slather in some organs and unruly leads while John is just pouring it on. I mean, if 'overacting' were a musical concept then I feel he'd a clear candidate, but that's not to take away that he has some angry damn pipes, shrieking howls and would have been an enormous star if he just had a great set of tunes to use them over.

You could also compare this to Lizzy Borden, not quite as shrill or consistent, in the vocals, but the music is far less eloquent, technical or effective. Energy Vampires throw you for a few loops, like the Meatloaf-ish opera "Rock 'N' Roll", over which Stewart STILL throws up some of those insane screams, creating an outlandish but amusing contrast, but I get the feeling that even for a demo, this stuff was in good need of a proper edit or a producer who knew how to take these ideas and ground them into phenomenal songs. The riffs are alright, but a little too standard for their style, and I don't know that I heard a catchy lead throughout, even though they are competent and atmospheric. The production is airy and era-appropriate, giving John a lot of space amid its vaunted ceilings to go ballistic, but every time I feel I get into a particular riff section it just sort of teeters out, almost like there's a drunken sheen to the whole affair, the undead authors tapping a few inebriated veins before heading into the studio. Tracks like "Different from the Rest" and the wailing bonus "On the Run" come pretty close to the quality I'd want, but overall it feels like it's all a VERY NEAR miss.

That said, I think if you want another example of what a potential weapon this guy was, Energy Vampires is no less of an exhibition than either of the Slauter XStroyes outings. I'm not saying in a world of Halfords, Udos, Dickinsons, Bordens, Danes, Dios or other screamers that Stewart brought a lot of novelty to the field, since there are a number of others with very similar characteristics to him, but this was a guy feeling around that upper air raid atmosphere, a caged animal that just isn't done service enough by the music, choruses, or lyrical line choices. With further development, meatier riffs, and hooks that got into the skin rather than deflected off of it, this could have been formidable.