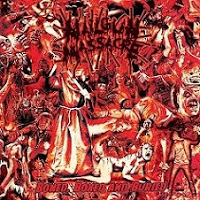 Going by the name and appearance of this album alone, you'd think Dutchmen Nailgun Massacre were probably a goregrind band, or at least a Cannibal Corpse-styled brutal death band. So when I spun their sophomore album Boned, Boxed and Buried, I was a little surprised to find that they play a very pure strain of late 80s death metal with primarily American influences. Slow to moderate  paced, using a voluminous production style and simpler riffing patterns that go straight for your jugular. While there's little to be said for any sort of originality here I'll have to give them some credit at taking something so familiar and them putting a fresh, bloodied stamp on it as if they could have released this back in 1989 and it would receive consideration among some classics.

Obituary is the closest reference I can make, simpler and grooving rhythm patterns that are potent nonetheless when splattered with the vocals. A little bit of a punkish attitude. Thread that influence with a little Swedish death & roll, and some well-crafted leads and evil melodies which recount classic Chuck Schuldiner. I'd also compare this to Six Feet Under, or rather, a Six Feet Under that didn't generally suck so much, because of that emphasis on rock-like rhythms, as well as one half of the vocals, which sound a lot like Chris Barnes grunts. The others that are often paired up with these are like a poor man's John Tardy of Obituary, and it's often quite hilarious what the two sound like in unison, an added layer of silliness that occasionally drags the album down a notch; especially when the Tardy-a-like seems to almost crack up at the end of a few lines. There's also a notable Autopsy influence, just in the massive, raw tones, the abrasion and ugliness that the record balls up like a cleaver-clenching fist and then beats on you before making some choice cuts.

The drums thunder along here, adding a lot of power to the simpler chugging rhythms, and the bass is also really enormous sounding and gives the whole affair a bowel-rumbling effect that is made even more fucking awesome when they cast out some simple, evil melody over the top as in the depths of "I Bury the Hatchet In Your Face". There are some screams and samples and narrations to further emphasize the themes in the lyrics, though once again they can feel a little too goofy if you just want your face flayed off by the great music, but not to the point they become a dealbreaker. Production is really great across the instruments, but I think perhaps the vocals are just a little too loud in general, and highlight some of those imperfections which in this case don't offer much positive charm.

As you can tell by the collage cover artwork these guys are huge on cult horror and exploitation flicks, so murderers and cannibals abound in the lyrics of Nailgun Massacre and that fits the mold well. Those who scoff at the simpler death metal of olde might not get much out of this, the leads and atmospheres created by the melodies are all very good, but otherwise the rhythms are so simplistic and bare-bones that they don't really offer any flashy surprises. Boned, Boxed and Buried channels film inspirations from the 70s and 80s through the death metal of the 80s and earlier 90s, and does a pretty cracking good job of it, with a handful of over the top moments that might have been snipped from the slasher reel.

Horror-meter: Seven out of...does your mom know you're up this late?