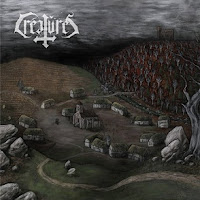 Le noir village is an album which appeals to me even on its most surface levels. Its obscurity, rarely being spoken of amidst the wave of avant-garde French black metal acts; while it's not quite as exotic or dissonant as a Blut Aus Nord or Deathspell Omega, or organic and homegrown to the degree of a Peste Noire, this is clearly well beyond the pale of another 'safe' black metal act, with risks aplenty, and risks that actually pay off for the listener embedded into its atmosphere. The artwork is also exactly what I like to see, some natural looking rustic village scene, a bloody and bleak wood stretching off towards some foreboding castle under grey skies. While it might not leap out at you as frightening, there's so much mystery that could be hiding under those wooded eaves, so much tragedy that could lurk in any of the quaint buildings, or the fields beyond, or approaching along one of the roadways...

Thankfully, this debut album sounds just as interesting and mysterious as it looks. For a one-man project (that of one Sparda), the amount of effort put into Créatures arrangements and ideas is tangible behind each of its epic-length tunes. That's not to say that all of them are equally brilliant or distinct, but no matter what shadows you're playing in here, you're bound to come across some quirk or surprise that separates it from the chaff of pure, monotonous, trad black metal. At its core, the harsher elements here morph between a mid-paced, somber melodic black metal and a more savage, blasted variety. The rhythm guitars aren't mixed too raw, but neither are they too sterile, and many of the riffs are affixed with tinny little melodies that create a particular, treacherous charm. Bass lines are often splayed out into curious creepshow grooves, while the beats seamlessly stray between the mandatory metallic intensity and the sparser backbone needed for the album's more orchestrated, atmospheric components. The rasps here are protacted and tortured to the level of sickening, often bursting into Burzum-like screams over the more frenzied musical moments. There are a variety of vocals used, ambitiously, to represent different characters relating the ominous story.

This would be all well and good, but it's the further details that truly flesh out the experience. Flights of crazy jamming pianos hover at the edge of perception, or eerie little synth lines that sound as if they were penned from classic haunted house film scores. Where acoustic guitars appear, as in the first track "L'horreur des lunes pleines", they are wonderfully sad and evocative, especially joined to the animal and nature samples. Sparda very often shifts into a more garbled, narrative, clean and deep voice in place of the rasping, which might be one small nick on the album's quality, as these lines can become a bit jumbled; but even then, I can appreciate the versatility he's trying to reward to listeners. Minor flaws like these are also easy to forgive when you are beholden to the brilliance of the bridge of "Martyre d'un tanneur", the true highlight of this album, when he evokes this amazingly catchy string section and haunted vocal accompaniment of whispers, rasps and howls that is well worthy of its inspirations, much less other avant-garde horror metal bands like Sigh or Hail Spirit Noir. When the horns erupt deeper into that bridge, and then the blasting and choir-like chants, you feel like some sun of genius has just shined upon the dark woodland border in which the music dwells.

Really, it's almost criminal that Le noir village is not a better known album. While that deep underground status is certainly an attraction for scum like myself, this is top flight stuff with only a few cracks marring its surface. Not only would I recommend it to fans of horror-themed black metal in general, or Sparda's compelling countrymen (early Blut Aus Nord, Aorhlac, etc), but also as a 'spookier' alternative for fans of Quebecois black metal acts such as Forteresse and Neige et Noirceur. The French lyrics and vocals might be a turnoff for some imbeciles, but I found the album intriguing enough that I'd sit there trying to translate through them and better embrace the concept. One of the better albums I've interfaced with this Halloween season, and a great introduction to an act that I hope we hear more from in the near future.