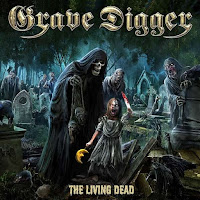 I have to admit that when I first saw the title and cover for this new Grave Digger record my pulse started to quicken, as my single favorite of all their extensive catalog was one of their prior 'horror themed' efforts, The Grave Digger from 2001, devoted to the works of Edgar Allen Poe. Thinking this might be the Germans' opus to George Romero, I wound up slightly disappointed at the actual content, not because it isn't a solid effort in terms of the music, but because it didn't have quite the same sort of coherent concept. There are tunes here about zombies, sure, and a few other themes that verge on the horrific, but roughly half the album is dedicated to pretty standard heavy metal fare, like "The Power of Metal" which is about the musical medium itself.

So a bit of a letdown thematically, but beyond that The Living Dead is yet another in a long line of competent, professional, Grave Digger records. Their 18th studio full-length overall, if I did my math right and am skipping the re-recordings album they dropped a couple years back. Like a lot of its predecessors, stretching back to around 1993 (The Reaper) when they truly solidified the German power metal sound they are most known for, the record does feel like its carved out of a lot of typical riffing progressions that the band have used time and time again, 'paraphrasing' them slightly on each iteration. You could honestly jump back 25 years to that and not notice a great degree of difference, other than what Axel 'Ironfinger' Ritt has brought to the table during his tenure, which is a little more Rhoads-like flash and flair to the guitar work that helps shepherd it away from redundancy or from the dire predictability it might otherwise have grown into. He brings a fraction of uniqueness to the decisions here, like the speed picked battery that inaugurates "What War Left Behind", and lots of anthemic little melodies all over the tracks that give it somewhat of a distinct personality.

But similar to their countrymen Primal Fear, Blind Guardian or most directly Running Wild, they really don't require a lot of variation to kick your ass. You know what you're getting into when you pick up a Grave Digger effort, and there's some comfort in that, and some comfort in the fact that they are so committed, over such a long career to keep up the power level. The rhythm section here hits hard, an imbreachable foundation for Ritt's playing and Chris Boltendahl's gritty, unapologetic, accented timbre. The mix is quite good, putting the guitar right up front but not losing the swerving bass lines, the beats or the atmosphere brought in by the vocals. Speaking of Running Wild, you'll hear a number of cuts like "Fist in Your Face" which bring to mind the more layman's style of muscular hard rock Rolf & crew brought on certain songs on their first three discs, or the earliest Grave Digger albums like Heavy Metal Breakdown and Witch Hunt. But for my money there is this large chunk in the middle of the record, stretching towards the end, where its best tracks like "Hymn of the Damned", "What War Left Behind" and "Insane Pain" had me most pumped, the latter of which has a melodic guitar line nestled in there which sounded to me like "The Time Warp".

As for the album's single "Zombie Dance", while it's one of the few cuts that actually service the undead theme I was hoping for, it's more of a party polka folk tune that warps into chugging metal verses, and it's a little on the goofy side, which is obviously the point of it if you've seen the video (in which Chris plays a newscaster who looks like he's about to break down at any moment). I think if you've got a drunk or warm enough audience at some large European festival and break that out, people are going to have a blast swinging around to it, but it's just not the most serious tune here, even though it's far from awful, and develops a decent bridge-chorus. As the flagship for this album though, I might have made another choice, and there are several of them, because The Living Dead is yet another testament to why this band has the longevity it has. They rock the rotten soil off of your self-inflicted domestic coffin, crack it open and then kick your butt back to the land of the living. This is hardly their best album, even in recent memory, but apart from 1-2 tracks it's damn dependable.