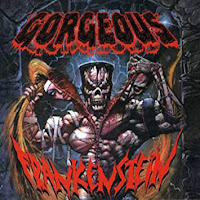 Misfits alumnus Doyle has a solid history of attempting to mesh together the horror swagger of that infamous punk entity with a more metallic edge. The best example of this was probably Kryst the Conqueror's Deliver Us from Evil EP in 1990, which had a bit of a Christian streak running through it and was surprisingly not all that bad; I can remember a few friends and I listening to it back in the middle of our high school days. Granted, that material never really turned into anything long term, and if the quality of this eponymous Gorgeous Frankenstein album is anything to judge by, perhaps the sealing off of that particular punk/metal path is really for the better; because this is quite bad.

The core here is a slightly more muscular Danzig style of simplistic hard rock and metal with a bit of Glenn's vocal antics being delivered through the performance of Landon Blood. The riffs are a sort of amalgam of very basic thrash, heavy metal, stoner doom and swaggering bluesy bar metal possessing the banality of a Black Label Society, only far less of the guitar proficiency. The riffs progressions are extremely mediocre across the whole album, with some predictable chugging and groove riffs meant only to work up the manliness of the vocals and the gang shouted chorus parts. It doesn't help that the tone of the rhythms sounds like crap, going for a noticeably more live feel but ending up rather annoying and amateur, especially when being used to perform some of the most insipidly boring chugs and squeals you've ever heard. There are some decent attempts by some backing synths and other atmospherics to try and dress this all up in a more appealing package, but it's really just a clutter of stuff that Pantera would have laughed out of their recording sessions back in 1989.

As mentioned, the vocals are real similar to Glenn Danzig, although once they pick up into a more howled, angry timber as in the depths of "Man or Monster", there's also a clear Rob Zombie style, strained growling influence, only nowhere near as harsh, memorable and charismatic. The drums are loud and clappy, while some of the bass lines seem a little too buzzy and filtered, used often to anchor the really bland bluesy swinging riffs in cuts like "Devilgirl". The lyrics are also very basic, but I wouldn't say they were one of the weak points, occasionally offering out some engrossing or titillating horror lines. Gorgeous Frankenstein is essentially a flesh golem stitched together by numerous other bands before it which have carved out excellent careers imbuing their hard rock, punk or industrial metal with the macabre, Gothic and kitschy traces of horror...but take away the life-giving lightning of catchy songs, or the distinction of those bands, for a fairly lazy and easygoing impersonation. It's not completely awful or incompetent, as there are a couple ideas here or there which make good sense, but I forgot it entirely in less time than the 35 minutes it took to get through the songs. You've got a lot better options out there, including some of the other albums members of this band have been involved with.