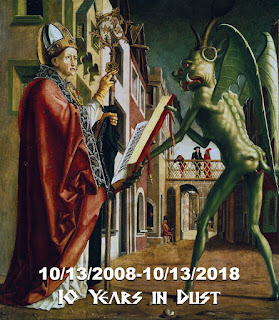 It was 10 years ago today that I decided to start up my first metal 'zine' since the late 90s, when I had published several issues of a short-lived, self-published, stapled and photocopied fan rag during my university years. With the help of several fellow forumers over at Penny Arcade, I launched a site to hopefully sharpen our critique on metal and other music, taking the name from my favorite novel (and title) by the late Ray Bradbury. I had at that point stepped away from performing in metal bands for a few years, but wanted to still contribute to the music that had always been there to strengthen and uplift me since early in my childhood. A decade and several thousand reviews later, I've come to learn a lot more about this medium, what makes a write-up work for me, and what doesn't. The response has always been overwhelmingly positive, so to my readers, and the bands and labels that have submitted material for me to cover, I owe you a tremendous amount of gratitude! To receive a message that someone really connected with an album through a list or review here, to experience that trust, has always been the highest reward to me, and the reason I press forward. To those friends who also posted reviews back in the earlier years of the site, I am grateful. Of course, there was no way I was going to post such a volume of reviews without attracting some degree of heat and hate, and while I've happily ignored a scant amount of childish, homophobic keyboard warriors and useless 'metal' trolls since the site's creation, I would absolutely like to thank those critics that have kept it constructive, or folks who have mailed me errata on band line-ups, grammar and so forth, which I've always been happy to correct.

Thank you so much for stopping by, and let's share a toast to ten more years, and all the great sounds, new and old, that we'll discover in that time. Marriage and children might have slowed down my output since the glory days, but...2028? Hold my mead horn.