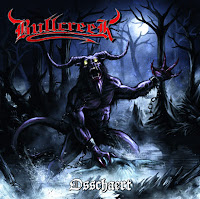 Osschaert is a rather simpler sort of death metal record that you won't hear very often these days, being that it doesn't conform too strictly to the dominant trends of the genre nor does it attempt to blow you over with any level of impressive technicality. This is primitive, choppy death loaded with basic hooks that keep you engaged without offering much nuance. I think a lot of listeners will draw some parallels to Amon Amarth, in how some of the riffs convey just the proper balance of glory and force, but I was feeling a real Asphyx or Hail of Bullets vibe for the most part, only with a vocalist more guttural and less distinct than Martin van Drunen. I also felt a few nods to other low-tech death metal bands of the past like Crack Up, Six Feet Under or Hypocrisy, but even more massive sounding.

This is in no small part due to the crushing rhythm guitar tone here, the closest approximation to their Dutch peers that I mentioned earlier, which grants even the most basic chord structure or voluptuous chugging a level of potency and attention-wrestling. They like to thread these meaty riffs with a lot of solos, which sound rather tiny by comparison but help fill another level of atmosphere, whether they spurt out some bluesier bits or structured harmonies wailing off into the night. The riffs can vary from more straight-up flows of melodic chords to slightly more charging, involved palm mute patterns and this creates a nice variation and contrast across the album that kept me absorbed, especially when they also toss in some melancholic, cleaner guitars or storming grooves. Even though the entirety of this debut remains within the bands stylistic portfolio, I feel like they give you enough fulfillment and deviation from predictability that you won't quite guess everything that follows, and so it just paints the record with a fresh coat of excitement, rather than the dull, dry plodding of a Jungle Rot.

Drumming and the low end in general is really tight here, but apart from affecting the mood of the record it's not all that impressive nor does it really stand out from the production of those guitars. As I mentioned, the vocals weren't super unique sounding, but they do their job if you just want no-frills growling which thrives on a lot of sustained lines which hover over the warlike battery and the fat of the rhythm tracks. Songs get fairly catchy but not to the point that I was thinking much about them after a few spins of the whole thing, and there's just a seasoned restraint about Osschaert which feels like they could fly further off the handle if the band wanted to, but they keep it reined in, and I was not all that surprised to find that the lineup was partially from the cult classic Dutch death metal act Burial, whose Relinquished Souls was a record I used to listen to from time to time. Bullcreek is not quite at the level of a Hail of Bullets, my favorite act from this scene performing death metal at this pacing and level of intricacy, but this is a solid enough start.