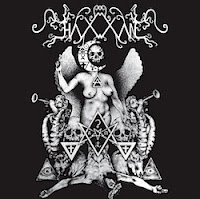 Killjoy's raucous, overbearing, expressive snarl almost gives him an unfair advantage when it comes to fronting extreme metal, and I'd have to say that pays off rather well on Haxxan's debut Loch Ness Rising, an effort which has come out of seemingly nowhere to debut on the suitably sinister Hells Headbangers imprint. He is not the only member of Necrophagia to feature on this project, however, because it is basically that entire band in its current incarnation trying out a marginally different style than on their mainstay. And I have to say, those differences are what gives this one a rather intriguing polish, to the point that I found this record superior to a lot of what its better known counterpart has been producing for the last decade and change.

It definitely cultivates some comparisons to Necrophagia, not only in the vocals themselves but also the use of slower, thrashier riff sections which hearken back to a classic Hellhammer/Celtic Frost aesthetic, but also remind me of that band's other Midwest US protegees like Usurper. Samples are incorporated sparingly when they can create a morbid or martial atmosphere over the simpler riffs, and they'll also sprinkle on organ-like synths or other effects that bind together well under Killjoy's verbal splattering, and create a little bit of a cult/Hammer horror vibe encased in an occult black metal flesh. Often you'll pull away this black & roll feel, as if they were channeling Satyricon off their last 3-4 albums, which is no big surprise since there are the obvious off-project ties to that band. But where I was actually taken aback were a few of the harmonies and melodies they'll lace through the more commonplace rhythms, giving it a nice, majestic icing to its evil heart...several times across the track list, for example in "Arcanum Arcanorum".

Some of the rhythms themselves will rock your face off, like those of "Babalon" or "Disciples of the Silent", just simple and oblique and Satanic-as-fuck grooves which instantly brought be back about 30 years to when that was a profound practice against the backdrop of metal bands getting increasingly more tech and extreme. Haxxan know with surety what they are setting out to do here, and every one of those bold riffs is balanced out with some higher pitched, evil notes and Killjoy's unmistakable multi-beast growls. The more experimental stuff like the Eastern-flavored instrumental "Aiwass" offers a decent break in the action, and seems to be paying further homage to the record's theme (Aleister Crowley), but ultimately it's just those Inferno-rocking patterns of chords and snarls that really won me over with this. A strong, steady, evil debut for those moments when you don't feel like you need much speed, just a surefire vehicle towards damnation.