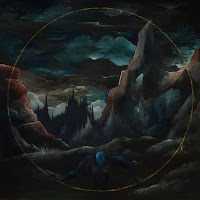 To think I can remember a time when Icelandic black metal was unanimous with Sólstafir and Sólstafir alone, but in recent years the country is literally exploding with harsh, cold, and compelling sounds that transmute their parent genre into something not quite so readily predictable, but still recognizing the fundamentals of their other Scandinavian forebears. Draugsól has only been around for a year or so, but with their debut full-length the trio is easily able to make a name for itself among fellow countrymen like Svartidauði, Sinmara, Zhrine, and Misþyrming, although I think it's obvious that they have a marginally more conventional feel to how they put together their material, drawing on a lot of propulsive blast beats, grinding black/death rhythmic undercurrent and spikes of dissonant chords that puncture through the roiling, earthen tones of the rhythm guitars like high speed tectonic shifting.

But Volaða land brings quite a lot to the table, from its more agonizing, spastic rhythmic elements to moments of architectural glory where the melodies spew forth and reign supreme. Vocally they use a more low-end, death growl rather than the raspy norm, and it's ugly and nihilistic and only vaguely seems to care about adhering to the riffing structure. But this functions fairly seamlessly whether they're sputtering out low-end tremolo picked riffing or the various breaks and changes coursing through their often 7-9 minute compositions, which also benefit a lot from a willingness not to lay into endless cycles of mundane repetition, instead becoming these explosive, cracked landscapes that are worth crossing even though your feet are likely to be burned and stabbed numerous times. I catch a little Marduk and Immortal here, in the utter relentlessness when they're firing at a full clip, and manifestation of a lot of angular, edgy bursts of rhythm that channel the same Morbid Angelic death metal roots that those other bands helped script into the black metal lexicon.

The debut also knows when to concede the aggression to a more atmospheric touch, as in "Spáfarir og Útisetur" which opens with cleaner guitars and then erupts into a powering Viking-like mid pace momentum with grooving drums that reminded me of some of the earlier Enslaved discs. But for the most part it can get rapid-fire to a fault, where the band seems almost ready to stumble over itself once it hits a certain crescendo. There is also a noticeable dearth of really interesting progressions in the guitars themselves. Enough variation and intensity that they avoid tedium, but there weren't a lot of moments at which I felt like I instantly wanted to replay a particular riffing section. In the end, though, Volaða land is an estimable, if not entirely formidable statement of arrival, one not lacking in potential for evolving further. If you're a fan of both fast-paced 90s, synth-less black metal out of Norway or Sweden, as well as some of the current crop of Icelandic upstarts, then Draugsól is at least worth checking out, even if this didn't quite leave me with as strong an impression as an Aphotic Womb, Unortheta or Söngvar elds og óreiðu.