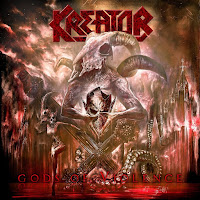 Gods of Violence reminds me a whole lot of Sodom's latest record in how it tries pretty effectively to be everything for nearly every generation or tier of the band's audience, and it does so with a close approximation of success. Granted, if you're pining for a tip of the hat to Endorama, Outcast, Renewal or Cause for Conflict then you might be largely left out in the cold, but that would at best comprise only a literal handful of listeners on this entire planet, and Kreator would be wise to do so if they want to pump up their base. They also don't delve back into the primacy of their demos or debut. However, if you're interested in hearing an amalgam of their later 80s, involved riffing patterns with the melodic overtures of records like Phantom Antichrist and Violent Revolution, all wrapped up in the accessible thrashing echo chamber of an Enemy of God, then this should fit rather snugly to your interests. Hell, even the TITLE here is drawn from some of those...

Yes, there are a handful of riff progressions here which certainly reflect back upon records like Terrible Certainty, Extreme Aggression and Coma of Souls, but they're all trussed up in an elegant penchant for melody which alleviates some of the sinister evocations of Mille's raving, barking vocals, giving a more uplifting, anthemic feel to even the harshes thrashing. This is actually most prominent in the architecture of the leads, which are generally pretty feel-good to the point that even some of the rhythm guitars backing them shift to a more accessible direction than the verse riffing. There's no question a level of nerdy progressive metal has infiltrated the band's sense for extremity, much like it did on Phantom Antichrist, but one could make a strong case that the band has reached 'peak proficiency' here, since the sheer number of notes and leads flitting around the 11 tracks and 52 minutes seems to exceed anything that has come before it. Bound up in the elegant, slick production values which make it effortless to experience every individual breath or note, Gods of Violence might not live up to its title in terms of the expected brutality, but it's one frenetic record with plenty to take in across a good number of listens.

Personal favorites here included "Army of Storms" and "Lion With Eagle Wings", just for striking that perfect balance of aggression and melody, and in the latter case even providing me with something that felt fresh and new in the Kreator lexicon. And Gods does that quite a lot...for every callback riff there's another here which simply has never existed before in their catalog, and while it's not going to prove very welcome for folks who feel like the band died off or sold out after Pleasure to Kill, I'm not ready to give up on the notion that these veterans have something left to give us as they continue to forge on through another decade. For a band over 30 years into its existence, this material doesn't entirely rest entirely on its laurels, lazily subsisting on nostalgia alone. Rather, it's inspired. Mille still sounds great, and the clarity with which his vocals can adhere to the more melodic guitars behind them is a real stunner. Drumming is efficient, and the bass is fine, but really this is ALL about those intricate, harried guitar lines, and how you feel about that will make or break your experience. So far, the songs don't rank among the most memorable in their canon, and no amount of busyness or proficiency can really make up for that, but Gods of Violence is enjoyable from fore to aft while I wait for whatever they summon up next.